Items related to She Fell Among Thieves (Richard Chandos)

She Fell Among Thieves (Richard Chandos) 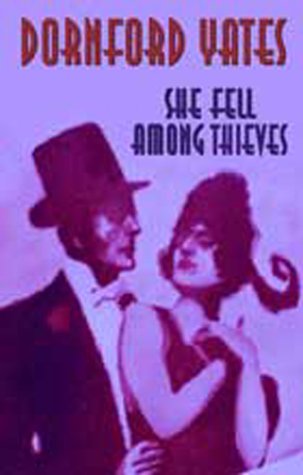 A vintage thriller featuring the welcome return of Richard Chandos, dashing hero extraordinaire, who seeks to rescue a young girl who has been kidnapped and drugged by a sinister old woman in the mountains of the Pyrenées. A gripping read originally published in serial form, ‘She Fell Among Thieves’ was a huge hit when it first appeared.

Born Cecil William Mercer into a middle class Victorian family with many Victorian skeletons in the closet, including the conviction for embezzlement from a law firm and subsequent suicide of his great-uncle, Yates' parents somehow scraped together enough money to send him to Harrow. The son of a solicitor, he qualified as a barrister whilst still finding timeto contribute stories to the Windsor Magazine. After the first world war hegave up legal work in favour of writing, which had become his great passion, and completed somethirty books. These rangedfrom light- hearted farce to adventure thrillers. For the former, he created the 'Berry' books which established Yates' reputation as a writer of witty, upper-crust romances. For the latter, he created ther character Richard Chandos, who recounts the adventures of Jonah Mansel, a classic gentleman sleuth. As a consequence of his education and experience, Yates' books feature the genteel life, a nostalgic glimpse at Edwardian decadence and a number of swindling solicitors. In his hey day, and as testament to hisfine writing, Dornford Yates' work was placed in the bestseller list. Indeed, 'Berry' is one of the great comic creations of twentieth century fiction; the 'Chandos' titles also beingsuccessfully adapted for television. Along with Sapper and John Buchan, Yates dominated the adventure book market of the inter war years. Finding the English climate utterly unbearable, Yates chose to live in the French Pyrenees for eighteen years, before moving on to Rhodesia where he died in 1960. 'Mr Yates can be recommended to anyone who thinks the British take themselves too seriously.' - Punch 'We appreciate fine writing when we come across it, and a wit that is ageless united to a courtesy that is extinct'-Cyril Connolly

1. She Fell Among Thieves (Richard Chandos)

2. She Fell Among Thieves (Richard Chandos)

3. She Fell Among Thieves