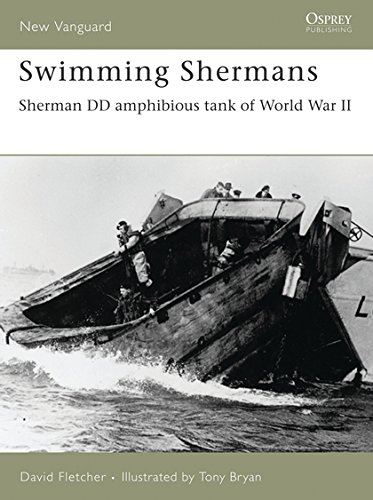 The Sherman DD (Duplex Drive) tank was a brilliant innovation; the design and development of a tank that could float and even 'swim' in water was controversial. Each tank was enveloped in a waterproofed canvas screen, launched at sea from landing craft and then 'swam' to shore, where the screens were deflated, allowing the tanks to operate as fighting vehicles. This book discusses the Sherman DD's many variants, including the prototype Valentine DD tank and examines the successes and tragic failures on the beaches of Normandy and further into North-West Europe, including the challenge of crossing the River Rhine.

"I found this book to be quite interesting as it covers the DD's very well. From a modeller's standpoint, I think that some of the photo coverage is weak, as there just aren't quite enough detail photos...the color plates are quite good, especially the center spread which shows quite well how the flotation screen sets up. I highly recommend this book for armor modellers, especially, 'Shermanaholics.'" --Chris Hughes, Armorama (July 2006)

David Fletcher was born in 1942. He has written a number of books and articles on military subjects and is currently the historian at the Tank Museum, Bovington, UK. He has spent over 40 years studying the development of British armoured vehicles during the two World Wars. Tony Bryan is a freelance illustrator of many years' experience. He initially qualified in Engineering and worked for a number of years in Military Research and Development, and has a keen interest in military hardware - armour, small arms, aircraft and ships. Tony has produced many illustrations for partworks, magazines and books, including a number of titles in the New Vanguard series.