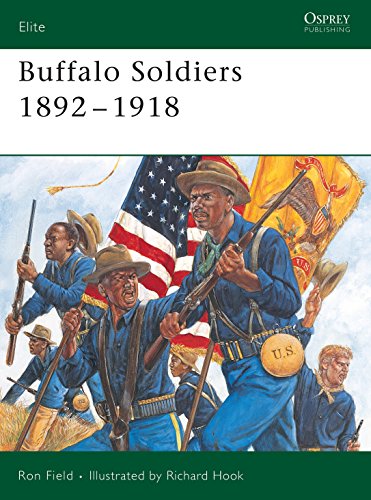 The Buffalo Soldier played an important part in the US Army's operations during the "age of American Imperialism", between 1898 and 1916. These men campaigned against the Spanish in Cuba, Filipino insurrectionists on Mindanao and Mexican border raiders. They went on to distinguish themselves in the trenches of World War I, and the sum of two divisions of these Doughboys fought with the French Army and the American Expeditionary Force. This book offers a succinct history of these units and the campaigns in which they fought, and it highlights the African-American US soldier, his uniforms and his gear throughout this era in rare photographs and carefully reconstructed color illustrations.

The segregated regiments of African-American troops represented an important minority in the small US Army at the turn of the 20th century. Units saw service in the Spanish-American War, in the Philippines jungle until 1902 and during the Mexican border campaign of 1916. Finally, in France 1917-18, black units suffered nearly 6,000 casualties, and four regiments were cited for their bravery. Despite suffering racial discrimination, they served with courage and discipline. This book covers the often ignored part of the Buffalo soldiers in these campaigns and the several different field uniforms worn during this period.

Ron Field is Head of History at the Cotswold School in Bourton-on-the-Water. He was awarded a Fulbright Scholarship in 1982 and taught history at Piedmont High School in California from 1982-83. He was associate editor of the Confederate Historical Society of Great Britain, from 1983-1992. He is an internationally acknowledged expert on US military history, and was elected a Fellow of the Company of Military Historians, based in Washington, DC, in 2005. Richard Hook was trained at Reigate College of Art. After national service with 1st Bn, Queen's Royal Regiment, he became art editor of 'Finding Out' magazine during the 1960s. He has worked as a freelance illustrator ever since, earning an international reputation, and has illustrated more than 45 Osprey titles. He is based in Sussex, UK.