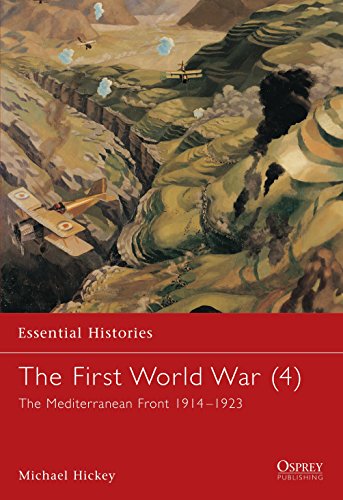 The First World War in the Mediterranean represented more than just a peripheral theatre to the war on the western front. This engaging volume includes details of allied attempts to capture Constantinople; bloody campaigning in Northern Italy; the defence of the Suez Canal and the defeat of the Turkish army in Palestine. The Arab revolt, skirmishes in North Africa and the entrapment of a huge allied garrison in Greece - the 'worlds biggest prison camp' as the Germans described it - are also covered. The result was the fall of the Ottoman and Austro-Hungarian empires and the birth of nations unknown in 1914.

"I am most favorably impressed by the Essential Histories series on the American Civil War. Written by four of the best historians of the military course of the war, these volumes provide a lucid and concise narrative of the campaigns in both the Eastern and Western theaters as well as penetrating analyses of strategies and leadership. Ideal for classroom use or fireside reading."

Michael Hickey joined the army in 1947 and served in Korea, East Africa, Suez and Aden. Before his retirement in 1981 he was Colonel GS Ministry of Defence. He has written a number of books, including 'Out of the Sky', a history of airborne warfare, and 'Gallipoli' (John Murray, 1995). In 2000 he was awarded the Westminster medal for Military Literature. His hobbies include cooking, brewing, walking and travel, and he is a guest lecturer on Holt's battlefield tours. Michael Hickey is married with two sons, two dogs and a domesticated turkey, and lives in Winchester.