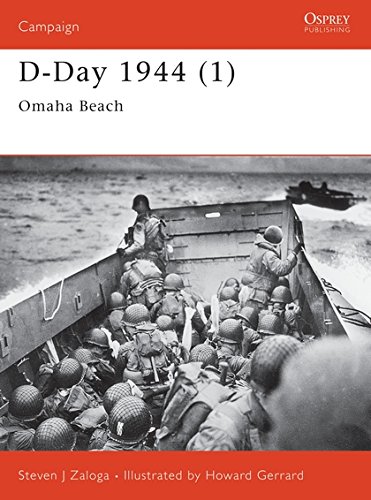 The D-Day landings of 6 June 1944 were the largest amphibious military operation ever mounted. The greatest armada the world had ever seen was assembled to transport the Allied invasion force across the Channel and open the long-awaited second front against Hitler's Third Reich. Of the landings on the five assault beaches, Omaha Beach was the only one ever in doubt. Within moments of the first wave landing a third of the assault troops were casualties. Yet by the end of D-Day the Atlantic Wall had been breached and the US Army's V Corps was firmly entrenched on French soil.

Books in Osprey's 'Campaign' series stand out at both secondary and college levels as works' that will engage and sustain student interest ... sophisticated maps and comprehensive graphics complement the texts without overwhelming them.

Steven J Zaloga works as a senior analyst for an aerospace research firm, and serves as an adjunct staff member with the Strategy, Forces, and Resources division of the Institute for Defense Analyses. His work includes over 50 books on military history and technology as well as many television documentaries. Steven's grandfather landed at Omaha beach on D-Day in an engineer battalion supporting the 1st Infantry Division, while his father served in an engineer battalion that landed on Omaha beach several days later. Howard Gerrard studied at the Wallasey School of Art and has been a freelance designer and illustrator for over 20 years. He has won both the Society of British Aerospace Companies Award and the Wilkinson Sword Trophy and has illustrated a number of books for Osprey including Campaign 69: Nagashino 1575 and Campaign 72: Jutland 1916. Howard lives and works in Kent.

Book Description Bloomsbury Publishing PLC, United Kingdom, 2003. Paperback. Condition: New. Ramiro Bujeiro (illustrator). Language: English. Brand new Book. The D-Day landings of 6 June 1944 were the largest amphibious military operation ever mounted. During the late Spring and early summer of 1944 the roads and ports of southern England were thronged with the troops, vehicles and ships of the invasion force. The greatest armada the world had ever seen had been assembled to transport US 1st Army and British 2nd Army across the narrow strip of the Channel and open the long-awaited second front against Hitler's Third Reich. This book reveals the events of that single day on Utah beach, one of the two US landings. Seller Inventory # BTE9781841763675