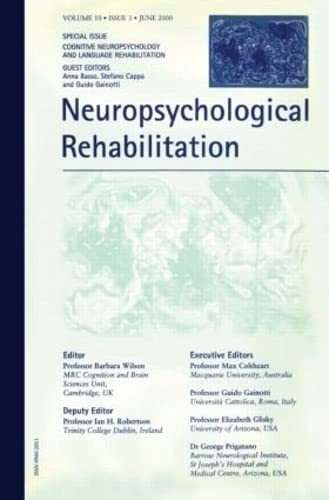 Even if, in recent years, the study of language disorders in brain-damaged patients has been strongly influenced by models and experimental paradigms of cognitive neuropsychology, much less relevant has been the impact of this new approach to language rehabilitation. Contrasting opinions exist on this subject among clinicians and researchers. Some authors maintain that cognitive neuropsychology has not changed and will not change the treatment of aphasia. Other authors adopt a less pessimistic attitude, either reporting empirical data that support this viewpoint, or trying to define more precisely theoretical models, patient's characteristics and treatment paradigms that should improve the efficacy of cognitively oriented treatments.
The main scope of the present volume, which is mainly based upon contributions presented at a workshop on the relationships between cognitive neuropsychology and aphasia rehabilitation, is to make the point on this controversial issue. The volume includes several theoretical papers discussing the role of the cognitive approach in the development of language rehabilitation (Shallice; Basso & Marangolo; Best & Nickels), as well as specific examples of the application of cognitive models to the treatment of disorders of written language (Luzzatti, Colombo, Frustaci & Vitolo) and of sentence-level impairments (Springer & Huber; Mitchum, Berndt & Greenwald). Two review papers, dealing with the pragmatic approach to aphasia rehabilitation (Carlomagno, Santoro, Labruna & Blasi) and with neuroimaging studies of recovery (Cappa) complete the issue.
The papers incorporate elements of the lively discussion, which took place among the restricted number of participants at the workshop, on a number of controversial issues. Leading among them were the fundamental questions: has cognitive neuropsychology given up to now a significant contribution to aphasia rehabilitation, and what can be expected in the future. We hope that the moderately optimistic view that emerged from the workshop will be shared by readers of this special issue.