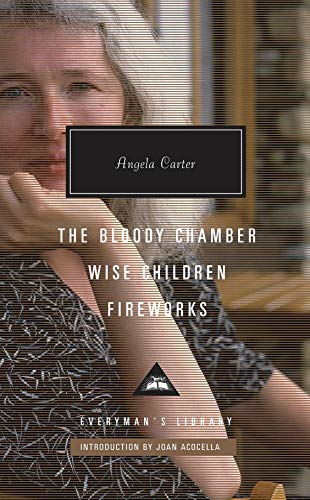 In The Bloody Chamber, Carter's famous collection of deeply unsettling stories inspired by fairy tales, a Beauty is turned into a Beast and Little Red Riding's grandmother is stoned to death as a witch; a young music student is swept off her feet in Paris by a middle-aged aristocrat and transported to his ancestral abode to re-enact the story of Bluebeard against a sumptuous fin de siècle background; a British soldier on a cycling holiday in Transylvania in the summer of 1914 finds himself the guest of an alluring female vampire. By contrast, in Wise Children, Carter's last novel), the comic, the bawdy and the life-enhancing prevail. An irrepressible elderly lady recalls the many colourful decades she and her sister spent as vaudeville performers - a tale as full of twins and mistaken identities as any plot of Shake- speare's. The early collection, Fireworks, reveals Carter taking her first forays into the fantastic writing that was to become her unforgettable legacy. The Everyman's Library omnibus gathers the best of Angela Carter in one astonishing volume.

"Angela Carter, for me, is still the one who said: "You see these fairy stories? Actually, each one of them is a loaded gun. Each of them is a bomb. Watch: if you turn it right it will blow up." (Neil Gaiman Daily Telegraph)

Book Description Everyman, 2018. Hardcover. Condition: Very Good. Very Good: a copy that has been read, but is in excellent condition. Pages are intact and not marred by notes or highlighting. The spine remains undamaged. Most items will be dispatched the same or the next working day. Seller Inventory # wbb0014155806