Items related to William Wallace and All That

Allan Burnett William Wallace and All That

William Wallace and All That 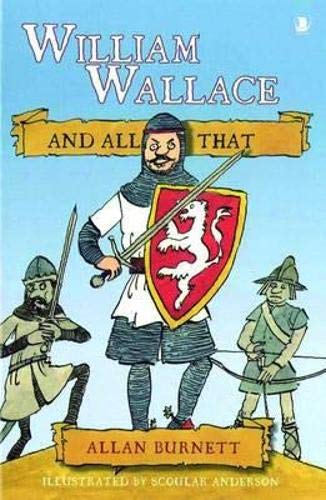 William Wallace And All That is a real-life adventure packed with historical facts about Scotland's legendary hero. Join Sir William Wallace on his fearsome quest to free the Scots from villainous King Edward and his evil empire. Growl with anger as you find out what nasty things Edward's vile henchmen did to Wallace's girlfriend and best pal. Get splattered with blood and gore as Wallace makes haggis of his enemies. Gasp with terror as you learn about the giant 'hedgehogs' that helped Wallace win battles. Groan with agony as you feel what it's like to be hanged, drawn and quartered. Discover how Wallace's grisly death made his legend grow. Bursting with brilliant illustrations, this book will have you shouting "Freedom!" after every page!

"Packed with humor I recommend the whole lot!" The School Librarian"

"Packed with humor - I recommend the whole lot!" --The School Librarian

Allan Burnett was born on South Uist, and grew up on Benbecula in the Western Isles. He studied at the University of Edinburgh, gaining an MA honours degree in Scottish History, and an MSc (with distinction) in European nationalism and British constitutional identities. A freelance writer, he has also worked as a librarian, an archivist, a 'ghost tour' guide, deputy foreign affairs editor at the Sunday Herald and deputy editor for the Scottish Standard. He now lives in Glasgow.

Scoular Anderson is one of Scotland's best known illustrators. He has written over seventy books (including 1314 And All That and 1745 And All That, both published by Birlinn) and has also illustrated a huge number of books by other authors. He lives in Dunoon.

1. William Wallace and All That Burnett, Allan; Anderson, Scoular

2. William Wallace and All That