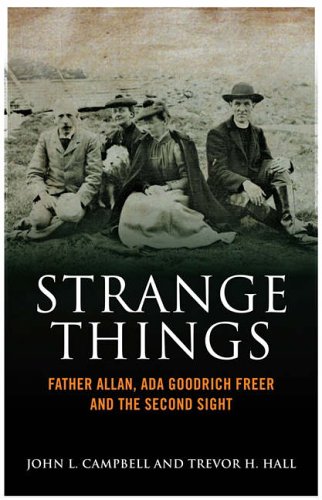 The supernatural has always played a prominent part of the life and culture of the Scottish Highlands and Islands, with ghosts, seers and second-sight featuring in countless stories and in the collective memory of the people. In the late 1890s, Fr Allan McDonald, parish priest of the island of Eriskay in the Outer Hebrides, made a collection of such stories which he entitled "Strange Things". His book contains the only surviving body of material connected to an unfinished enquiry made on behalf of the Society of Psychical Research. The history of the enquiry and the reasons for its abandonment, is revealed here, as are many other facts about the Highland supernatural tradition, and also about the remarkable career of Society of Psychical research member Ada Goodrich Freer. Fascinating as a story of late Victorian obsessions, as a story of two different people and cultures, or simply as a story of one of the deepest strands of Hebridean culture, "Strange Things" is a story of tradition, folklore, manipulation, charlatanism and fraud, now reprinted for the first time since 1968.

John Lorne Campbell was one of the Gaelic world's greatest scholars and has made hundreds of recordings of Gaelic songs and stories. He has published a number of books on the subject, including Tales from Barra, Stories from South Uist and A School in South Uist. Trevor H. Hall has made a lifelong study of odd happenings, mainly with a view of finding an explanation for them. His other publications include The Strange Case of Edmund Gurney and New Light on Old Ghosts., Ronald Black is Gaelic Editor of The Scotsman He is author or editor of: Mac Mhaighstir Alasdair: The Ardnamurchan Years, An Tuil: Anthology of 20th Century Scottish Gaelic Verse, An Lasair: Anthology of 18th Century Scottish Gaelic Verse, Eilein na h-Oige: The Poems of Fr Allan McDonald and The Gaelic Otherworld.