Items related to Ginger Geezer - The Life Of Vivian Stanshall 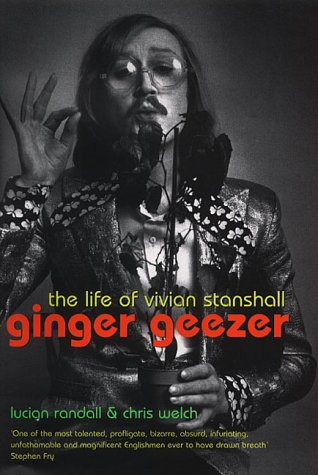 Biography of Vivian Stanshall, of whom John Peel said: 'As lead singer of the Bonzo Dog Doo-Dah Band, Vivian Stanshall was the court jester of the underground rock scene of the Sixties... he brought an absurdist sense of humour to a scene that was already beginning to take itself too seriously.'

Vivian Stanshall started the Bonzo Dog Do-Dah Band in the early 60s while at art school in London. Rehearsials were in the canteen and gigs held in pubs. The anarchic shows, with comedy, singing and 1920s dress took off, and after leaving college albums were made: I’m the Urban Spaceman’ reached number 5 in 1968, and one track appeared in the Beatles’ film Magical Mystery Tour. The group – major players were Neil Innes, Vivian, Rodney Slater and Roger Ruskin-Speare – appeared often on TV’s Do Not Adjust Your Set, toured the US, and appeared at the Isle of Wight concert in 1969. But the following year the band broke up. What followed for Stanshall was not the successful solo career (that Neil Innes managed) but binges with Keith Moon and drinking and drug problems. Vivian continued to work: in film radio, in adverts and albums; but two marriages failed, a houseboat sank... and Vivian died in a house fire in north London in 1995.

Vivian Stanshall, artist, musician, comic, broadcaster and all-round oddball, was a genuine English eccentric. Lucian Welsh and Chris Randall's Ginger Geezer: The Life of Vivian Stanshall is an attempt to unravel the tragic story of this enigmatic and idiosyncratic man. Stanshall, blessed with a forest of red hair, an excess of energy and an urge to shock, formed the Bonzo Dog Band just after art school. The band, who began life as a humorous trad jazz combo, evolved into the perfect vehicle for his many talents. Combining the best elements of cabaret, jazz, rock, performance art and musical hall comedy, the Bonzos gained critical acclaim and commercial success. The pressures of touring and the usual personal differences caused the band to implode at the end of the 1960s. Although they reformed intermittently, Stanshall never produced a consistent body of work again. Flashes of brilliance did occur: solo albums, a comic radio masterpiece Sir Henry at Rawlinson's End (later unsuccessfully filmed) and several songs co-written with Stevie Winwood all bear witness to this. Unfortunately alcohol, valium and his own mercurial nature prevented him from realising his full potential. Much of the 1970s were spent in a haze, often creating questionable drunken mayhem with fellow boozer Keith Moon of the Who--the pair once paraded through Soho dressed as Nazis.

His dulcet tones however, were much in demand. Eloquently described here by friend and admirer Stephen Fry as "a Dundee Cake of a voice, astoundingly deep, rich and fruity", Stanshall graced Mike Oldfield's Tubular Bells and the Damned's Lovely Money. In later life voiceover and advertising work provided him (briefly) with a lucrative income. Vivian was never able to stay of the bottle for long and the offers slowly dried up. With friends and family alarmed by his drinking, Stanshall sought the company of street drinkers near his Muswell Hill flat. These new friends robbed him of many of his prize possessions and enjoyed drinking at his expense. In 1995, after one such session he died in a fire at his home. Randall and Welsh clearly love Stanshall but their book never quite gets to grip with their flamboyant subject. It is shoddily arranged--details are confused and there are many infuriating repetitions. Much of the writing is workmanlike at best. They seem torn between creating an oral history from the reminiscences of his many friends and writing a proper "authorial" biography. Despite this, in celebrating his unique genius they do succeed in reminding us what a sorry loss his premature departure was. --Travis Elborough

‘I'm whatever you like, just don't expect me to join in.’ Vivian Stanshall

Book Description -. Hardcover. Condition: Very Good. Ginger Geezer - The Life Of Vivian Stanshall This book is in very good condition and will be shipped within 24 hours of ordering. The cover may have some limited signs of wear but the pages are clean, intact and the spine remains undamaged. This book has clearly been well maintained and looked after thus far. Money back guarantee if you are not satisfied. See all our books here, order more than 1 book and get discounted shipping. Seller Inventory # 7719-9781841156781

Book Description Fourth Estate, 2001. Hardcover. Condition: Good. A slight tan to page edges Good condition is defined as: a copy that has been read but remains in clean condition. All of the pages are intact and the cover is intact and the spine may show signs of wear. The book may have minor markings which are not specifically mentioned. Most items will be dispatched the same or the next working day. Seller Inventory # wbb0014474001

Book Description Fourth Estate, 2001. Condition: Good. A+ Customer service! Satisfaction Guaranteed! Book is in Used-Good condition. Pages and cover are clean and intact. Used items may not include supplementary materials such as CDs or access codes. May show signs of minor shelf wear and contain limited notes and highlighting. Seller Inventory # 1841156787-2-4