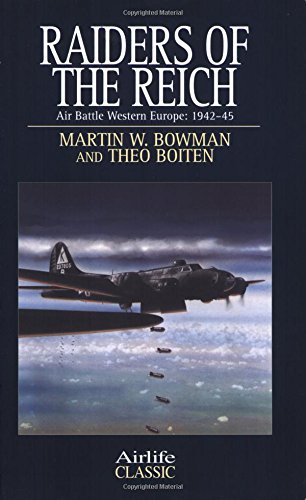 This is the story of the air war over Western Europe, much of it told by the pilots and air crew who took part. It spans the period between 1942 and 1945, and covers the encounters between the Luftwaffe and the air forces of the USA, Britain and the Commonwealth.

1. Raiders Of The Reich (Airlife Classics)

Book Description The Crowood Press Ltd, United Kingdom, 2003. Paperback. Condition: New. New edition. Language: English. Brand new Book. 'Bandits attacking ten o'clock' was heard just as Frenchy opened fire with the twin fifty-calibre guns in the top turret and Doe opened fire with the gun in the nose, both trying to shoot down two Fw 190s approaching in a coordinated attack from the ten and twelve o'clock positions. As I saw the wings of the first fighter light up with machine-gun and cannon fire. I pulled up and healed directly towards the attacking fighters on a collision course with the one attacking from twelve o'clock. Just as they broke off their attacks by rolling over and diving. 'Fighter attacking, six o'clock level, ' was reported by Ecky in the tail, along with. "Get them somebody, my guns are jammed.' 'Either through accident or design, as he went to turn away, his wing clipped the wing and then the right tail fin of Cargile's B-24, knocking both off. The Fw 190 . seemed to fold up and then go into its last dive. With part of his wing gone the big B-24 dropped away like a fluttering leaf, finally going into a tight spin, its fate sealed.' 'I was completely unbuckled, sitting on the front edge of my seat when a voice came over the radio: '109s, here they come'. About fifty Me 109s had bounced our squadron of sixteen P-51s and about fifty more engaged our other two squadrons up ahead . a single Me 109 passed directly in front of me in a forty-five-degree dive. With a reflex action. I peeled off after him . I firewalled the throttle and steepened my dive to match his . Just before I started a careful pull-out at about 8,000ft I saw the airspeed needle bumping 600mph. 95mph over the redlined airspeed of 505mph.'. Seller Inventory # BZE9781840374308

3. RAIDERS OF THE REICH (AIRLIFE CL