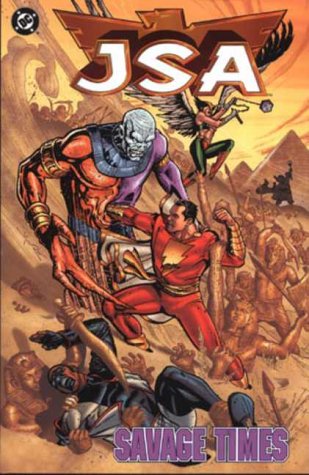 Before the JLA, the Justice Society of America was Earth's mightiest team of defenders, and now its new and improved roster of fan-favourite superheroes are once more ready to stand and fight dark forces wherever and whoever they may be. When an old adversary launches a preemptive strike on the JSA from the future things get a little messed up. The heroes are scattered across time, fighting the forces of immortal villain Vandal Savage in ancient Egypt, a crystal planet in the future and 1940s America! And let's not forget Powergirl's super-psycho meta-stalker...JSA: Savage Times continues this terrifically successful series, proving you don't need Superman, Batman or Wonder Woman to be a big hit with the bad guys...

David Goyer is the screenwriter of the movies Blade and Blade 2. He has also worked on the acclaimed Starman. Geoff John's other writing work includes Flash, Hawkman and Teen Titans. Patrick Gleason has pencilled Aquaman, Hawkman and JLA. Leonard Kirk is a veteran artist whose credits include Alien Nation, Captain Marvel, Dinosaurs for Hire, Star Trek: Deep Space 9 and Supergirl.