Items related to On the Road to Perdition Book One: Oasis: Bk. 1

On the Road to Perdition Book One: Oasis: Bk. 1 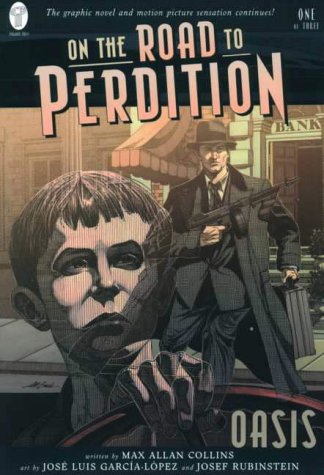 In the best-selling graphic novel, The Road to Perdition, by Max Allan Collins and Richard Piers Rayner, readers were introduced to Michael O'Sullivan, the legendary Tri-Cities "Angel of Death" - and his son, Michael Jr. The inspiration for 2002's smash-hit film, both versions of the story captured readers' and viewers' hearts and minds. Now comes a tale from the road, as Michael and his son seek vengeance for the death of Michael's wife and younger son, by robbing banks along the way and disrupting the cash that fuels organised crime. When Michael Jr. contracts a life-threatening illness, the duo are forced to seek refuge. But their oasis of calm is set to be short-lived, as bounty hunters despatched by the Capones are closing in...

Max Allan Collins is a two-time winner of the Writers of America Shamus award, as well as the creator of the 'Nathan Heller' historical detective fiction series. Jose Luis Garcia-Lopez is an acclaimed illustrator, and has also worked on Superman: Kal.

On the Road to Perdition: Oasis Bk. 1