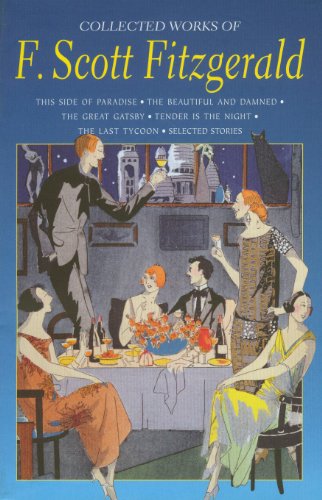 Few American novelists of the twentieth century have stayed as modern as F. Scott Fitzgerald. He gave a name to his age, 'the Jazz Age', but his reputation has outlived it.

Gathered here are the five novels he wrote in his relatively short career, together with a number of the many short stories he wrote between 1922 and his death in 1940. This Side of Paradise catapulted him to fame, its exposé of the manners and morals of a post-war generation becoming a cause célèbre. The Beautiful and Damned, a semi-autobiographical moral parable of a doomed marriage, affirmed Fitzgerald's status as the spokesman for the generation of the 1920s. His third novel, The Great Gatsby, remains for many readers the definitive American novel of the twentieth century, its eponymous hero a complex fictional portrayal of a romantic imagination at the mercy of a corrupt reality. Tender is the Night is an American Vanity Fair set on the French Riviera in the 1920s. Fitzgerald was working on The Last Tycoon at his death in 1940, and many critics rank his account of Hollywood at the height of the studio system, even in its unfinished state, as comparable to the achievement of The Great Gatsby.

1455 pages. Book is in Very good condition throughout. This Side Of Paradise-The Beautiful And Damned-The Great Gatsby-Tender Is The Night-The Last Tycoon

Francis Scott (Key) Fitzgerald was born in St Paul, Minnesota in 1896. He was given three names after the writer of The Star Spangled Banner, to whom he was distantly related. His father, Edward Fitzgerald, was a Southern gentleman and failed businessman. His mother, Mary McQuillan, was the daughter of an Irish furniture wholesaler. In 1913 Fitzgerald went to Princeton University but did not graduate. Instead, he joined the army was discharged in 1919. During that time he met Zelda Sayre, who he married in 1920.

In the same year as his marriage, his first novel, This Side of Paradise, was published and became an instant success, enabling Fitzgerald and Zelda to pursue the decadent lifestyle they craved. In 1922 they moved to the affluent Long Island community of Great Neck, which provided Fitzgerald with the material for his novel, The Great Gatsby (1925). The book was well received by the critics but did not bring the financial rewards he had hoped for and in order to finance his extravagant lifestyle Fitzgerald wrote stories for various magazines. His published works include, Tender Is the Night (1934), The Diamond as Big as The Ritz (1922), The Beautiful and Damned (1922) and The Last Tycoon (1941)

During the next five years the Fitzgeralds travelled back and forth between Europe and America as they found Europe cheaper to live in. In 1930 Zelda suffered the first of many nervous breakdowns, and was hospitalized on a number of occasions both in Europe and America. Fitzgerald, meanwhile was drinking heavily. In 1937 he travelled to Hollywood where he met the gossip columnist, Sheila Graham, with whom he lived for the rest of his life. He died of a heart attack in her apartment on December 21st, 1940. Zelda died in a hospital fire in 1948.