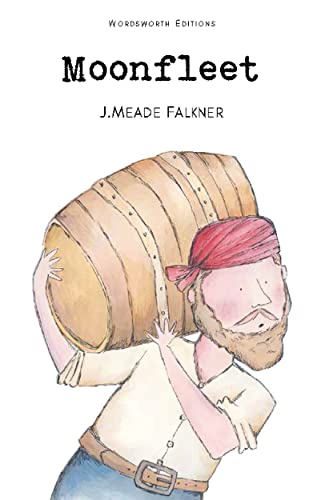 When fifteen-year-old orphan John Trenchard is banished by his Aunt Jane, he goes to live at the local inn with the mysterious Elzevir Block, whose son has been killed by Customs Officers. Unofficially adopted by Block, John comes to learn the reasons for the noises in the graveyard at night, of 'Blackbeard' Mohune's lost treasure and Elzevir Block's secret.

This dashing tale of eighteenth-century Dorset smugglers will be enjoyed by all who love stories of derring-do written in the tradition of Treasure Island.

Moonfleet (1898) begins as a mystery and an adventure story, a tale of smuggling set among the cliffs, caves, and downs of Dorset. What will be the outcome of the conflict between smugglers and revenue men? How can the hero, John Trenchard, discover the secret of Colonel John Mohune's treasure? As the book progresses these two interwoven themes resolve themselves into a third and richer one, with the friendship and suffering of both John Trenchard and the craggy, taciturn Elzevir Block. The novel is at once a well-paced account of dramatic action and a celebration of the unregainable freedoms of childhood, when, as Falkner's sister wrote in a memoir, 'there are no seasons, everything happens all the year round'. Falkner's feeling for history and for the landscape of his Dorset setting combine with his gift for storytelling to turn Moonfleet into a historical romance of moving intensity.