Items related to Ring of Hate: The Brown Bomber and Hitler's Hero

Ring of Hate: The Brown Bomber and Hitler's Hero 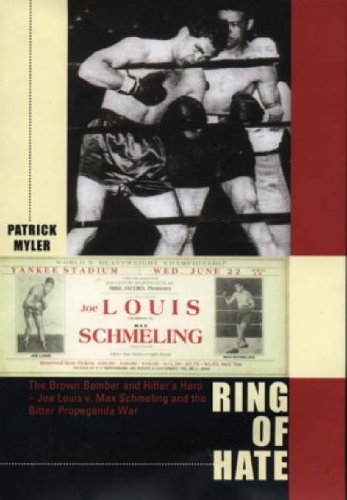 More than the world heavyweight championship was at stake when Joe Louis fought Max Schmeling on 22 June 1938. In a world on the brink of war, the contest was projected as a test of nationalistic, racial and political ideals. It was America v. Germany, black man against white man, a showdown between democracy and totalitarianism. The 'Brown Bomber' had suffered enough prejudice and humiliation since being born in an Alabama sharecropper's wooden shack to seem an unlikely flag-bearer for the 'Land of the Free', but his main mission was to gain revenge over the man who had beaten him so badly two years earlier. While Nazi propaganda minister Joseph Goebbels was boasting that Schmeling would prove that a true Aryan would always beat an inferior black opponent, President Roosevelt was telling Louis, his White House guest, 'America needs muscles like yours to beat Germany.' No single event in the history of boxing generated as much excitement or such bitterness and extremes of emotions. It was the night Louis hit a peak of fistic perfection. He hardly missed a punch as he destroyed the challenger inside three brutal minutes. When the Second World War broke out, Louis spent his army service giving exhibitions and boosting troop morale while Schmeling, disowned by Hitler, was forced to serve as a paratrooper and was injured in the invasion of Crete. A proud German, but adamantly never a Nazi, he secretly sheltered Jews and helped them escape to freedom. Subsequently, the two boxers' lives took contrasting turns. Louis was hounded over unpaid taxes and drifted into a hazy word of drugs, paranoia and ill health, eventually dying in 1981. Schmeling, meanwhile, became a highly successful businessman and is still active as he nears his 100th birthday. Ring War is a compulsive story of two decent human beings, drawn together by their chosen profession and divided by the cruel demands of warring nations. Ultimately, they put the legacy of hate behind them to form a life-long friendship.

"The contrasting lives, bitter rivalry and latter-day friendship of Schmeling and Louis have been absorbingly chronicled in Ring of Hate, sensitively written by Patrick Myler" (Independent on Sunday)

"An entertaining read on a strange and dangerous time, when they each ruled the hearts of millions" (Sunday Tribune)

"In the excellent Ring of Hate, Myler provides a fascinating build-up to the fight" (Belfast Telegraph)

Patrick Myler is a writer and boxing historian. His previous books on the sport include Gentleman Jim Corbett and A Century of Boxing Greats and articles have also appeared in The Ring, Boxing News, Boxing Monthly and the British Boxing Monthly.

Book Description Hardcover. Condition: Very Good. Very Good: a copy that has been read, but is in excellent condition. Pages are intact and not marred by notes or highlighting. The spine remains undamaged. Most items will be dispatched the same or the next working day. Seller Inventory # wbb0017194826