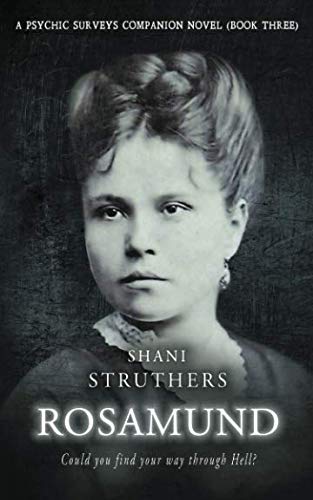 A shorter novel, Rosamund feeds into the bestselling Psychic Surveys series, and is the story of sub-character Rosamund, it can also be read as a STANDALONE.Could you find your way through Hell?Ruby Davis runs Psychic Surveys, a high street company specialising in domestic spiritual clearance. Having inherited her ability to see beyond the veil that separates this world and the next from her mother, Jessica, she is busy helping grounded spirits to cross the great divide. In turn, Jessica inherited her gift from her mother, Sarah, and Sarah from Rosamund.Throughout the early twentieth century, Rosamund Davis was a woman held in high regard concerning her mediumship abilities and her pioneering work with London’s famous psychical society. She published many papers on psychic matters, although there are some that remain unpublished, for the eyes of the Davis family only. It is these unavailable works concerning the non-spirit that fascinate many – entities born of negative thoughts that subsequently take on their own energy. Entities known as demons.But what caused her to write about such dark matter?From her own notes, in her own words, this is Rosamund’s account.~~~ Download the bestselling Psychic Surveys series today or read for FREE in KU:Psychic Surveys Book One: The Haunting of Highdown Hall Psychic Surveys Book Two: Rise to Me Psychic Surveys Book Three: 44 Gilmore Street Psychic Surveys Book Four: Old Cross Cottage Psychic Surveys Book Five: DescensionPsychic Surveys Book Six: Legion DUE SPRING 2019Psychic Surveys Companion NovelsEve: A Psychic Surveys PrequelBlakemort ThirteenRosamund Other books by the author:This Haunted World Book One: The VenetianThis Haunted World Book Two: The Eleventh FloorJessamine (Jessamine Series Book One)Comraich (Jessamine Series Book Two)