Items related to BINOCLARITY: A travel along the length of the River...

Newport, Thomas BINOCLARITY: A travel along the length of the River Thames and into the heart of the British psyche

BINOCLARITY: A travel along the length of the River Thames and into the heart of the British psyche 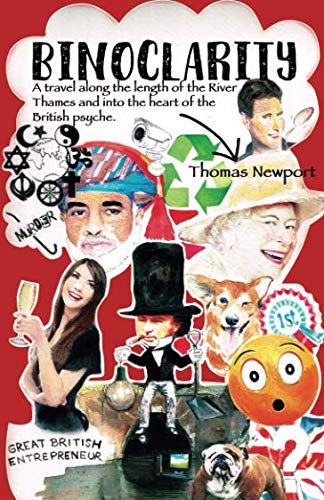 Camping out in the woods, in fields and even in an old WWII pillbox are just some of the things that the entertaining and tenacious Thomas Newport gets up to in his quest to study the British people. Amongst the questions he ponders are: how did we become so powerful; exactly who are we, and what will we become? His journey of over 300 miles takes him down the entire length of The River Thames from its source in the Cotswolds to the end of the path at the Thames Barrier in London. Many an entertaining detour is made along the journey, all in the quest to get inside the complex British psyche. Eccentricity, humour, famous witticisms and anecdotes, generosity, local legends, the north-south divide, ethnicity, hidden histories and many a hidden cave, crime, decline, unsavoury characters and corruption are just some of the themes he discusses during his travels. He also makes some very surprising discoveries along his journey. Perhaps most surprising is how the quintessentially British town of Henley-on-Thames, recently became the 'small town and village murder capital of the UK'. Newport investigates how many of Reading's houses could collapse at any time and delves into the often murky business dealings and disasters overseen by some of the Thames Valley's leading business barons. The wry wit of the author is always heard as he ponders on his subjects. Add to this: a wealth of notable facts and figures about Britain and the Thames Valley; cave dwellers; caped crusaders; swingers; unsung heroes, highwaymen and dim-witted robbers, and you have yourself one of the most enjoyable romps through Britain ever written.

1. BINOCLARITY: A travel along the length of the River Thames and into the heart of the British psyche