Items related to The War Master: Master of Callous (Doctor Who - The... 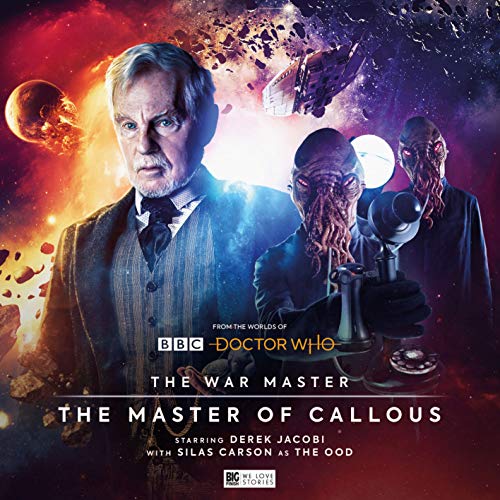 A brand-new four-part adventure featuring the Master's exploits in the Time War. 1. Call for the Dead by James Goss. 2. The Glittering Prize by James Goss. 3. The Persistence of Dreams by Guy Adams. 4. Sins of the Father by Guy Adams. On the mining colony Callous, Elliot King struggles to meet the demands of its governor, Teremon. The odds are stacked against him, and his options are running low. The world that once promised dreams now offers only despair. A wild Ood stalks the forests, carrying an antiquated phone. The caller promises much - he claims he can change the world - but he always speaks a devastating truth. He is the Master and the Ood will obey him... but to what end? The Time War is an epic conflict unpinning much of the story arcs of the most recent series of Doctor Who on TV. Here, Sir Derek Jacobi reprises his terrifying turn as the Doctor's arch nemesis The Master from episode Utopia, to show how the character survived in a universe torn apart by war.. CAST: Derek Jacobi (The Master), Silas Carson (The Ood), Maeve Bluebell Wells (Cassandra King), Samantha Beart (Martine King), Simon Ludders (Elliot King), Pippa Haywood (Teremon), David Menkin (Herschel), Barnaby Edwards (Jaques), RichardEarl (Sassanby), Kai Owen (Porrit), Joe Shire (Calia), Angela Bruce (Mother), Wilf Scolding (First Soldier) and Tom Forrister (Second Soldier).