Items related to Under The Skin (Canons)

Faber, Michel Under The Skin (Canons)

Under The Skin (Canons) 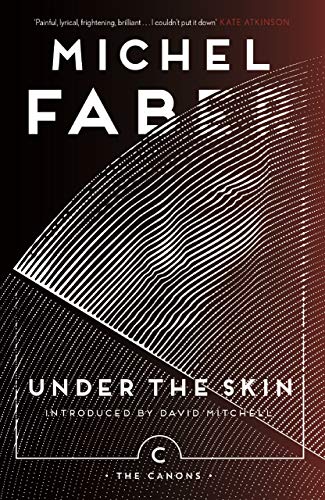 With an introduction by David Mitchell

Isserley spends most of her time driving. But why is she so interested in picking up hitchhikers? And why are they always male, well-built and alone?

An utterly unpredictable and macabre mystery, Under the Skin is a genre-defying masterpiece.

Isserley always drove straight past a hitch-hiker when she first saw him, to give herself time to size him up. She was looking for big muscles: a hunk on legs. Puny, scrawny specimens were no use to her.

So begins Michel Faber's first novel: a lone female scouts the Scottish Highlands in search of well-proportioned men and the reader is given to expect the unfolding of some latter-day psychosexual drama. But commonplace expectation is no guide for this strange and deeply unsettling book; small details at first, then more major clues, suggest that something deeply bizarre is afoot. What are the reason's for Isserley's extensive surgical scarring, her thick glasses (which are just glass), her excruciating backache? Who are the solitary few who work on the farm where her cottage is located? And why are they all nervous about the arrival of someone called Amlis Vess?

The ensuing narrative is one of such cumulative, compelling strangeness that it almost defies description--the one thing that can be said with certainty is that Under The Skin is unlike anything else you have ever read. The result is a narrative of enormous imaginative and emotional coherence from a writer whose control of his medium is nearly flawless and who applies the rules of psychological realism to a fictional world that is terrifying and unearthly to the point that the reader's identification with Isserley becomes one of absolute sympathy.

Michel Faber's debut deserves to inherit and expand upon the acclaim bestowed upon his short-story collection Some Rain Must Fall. Under the Skin is a reviewer's nightmare and a reader's dream: a book so distinctive, so elegantly written and so original that all one can say is simply to experience it. An extraordinary first book. -- Burhan Tufail

"One of the best-orchestrated reveals in modern British fiction . . . Michel Faber is a masterly writer" (David Mitchell)

"Teases and prods the reader up a plethora of literary blind alleys before hauling them screaming towards its final, thrilling destination" (Daily Telegraph)

"Strange, adept, original . . . Would that more first novels were as adventurous or as funky and daring in their conception" (Independent on Sunday)

"A brilliantly compressed drama of threat and ambiguity . . . Recalling writers such as Jim Crace and Russell Hoban, Under the Skin, like Faber's short stories, is an extremely assured and imaginative work" (Observer)

"Astonishingly, this is Michel Faber's first novel. It is audacious, fascinating, repellent and quite unlike anything I have ever read" (Mail on Sunday)

"The fantastic is so nicely played against the day-to-day that one feels the strangeness of both . . . A remarkable novel" (New York Times)

1. Under The Skin (Paperback)

Book Description Canongate Books Ltd, United Kingdom, 2017. Paperback. Condition: New. Main - Canons edition reissue. Language: English. Brand new Book. With an introduction by David MitchellIsserley spends most of her time driving. But why is she so interested in picking up hitchhikers? And why are they always male, well-built and alone?An utterly unpredictable and macabre mystery, Under the Skin is a genre-defying masterpiece. Seller Inventory # AA99781786890528

3. Under the Skin (Paperback)

Book Description 2017. Paperback. Condition: New. 6th. Paperback. With an introduction by David Mitchell.Isserley spends most of her time driving. But why is she so interested in picking up hitchhikers? And why are they always male, well-built and alone?.Shipping may be from multiple locations in the US or from the UK, depending on stock availability. 304 pages. 0.230. Seller Inventory # 9781786890528