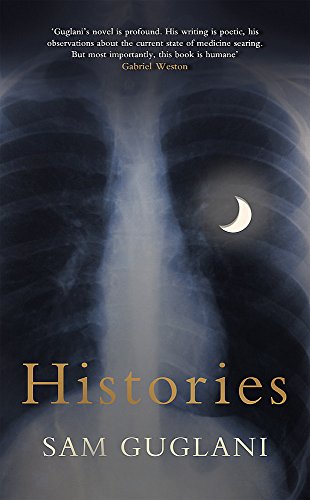 Histories is a hypnotic portrait of life in one hospital, over one week. In the corridors and consulting rooms, by the bedside, through the open curtain, we witness charged encounters within the emotional and physical world of medicine. Old insecurities surface as junior doctors try to save a man from dying; an enraged chaplain picks a fight with a consultant; a porter waxes lyrical on his invisibility.

These are only some of the stories that so seamlessly connect, collide and create an unforgettable panorama of being. Sam Guglani's vivid prose has the raw intensity of poetry that pulls the reader in on every page.

Remarkable and full of grace. It broke my heart. (Sarah Perry)

"Many times man lives and dies / Between his two eternities:" says Yeats, but for the physician, the cycle becomes infinitely more complicated: for if, as Donne declares, "every man's death diminishes me" then, as Sam Guglani points out, with elegance, compassion, sadness and, occasionally, justifiable anger, the cost of taking, recording, interpreting and bearing witness to so many 'histories' - of life, of diminishment, of death - should compel, not only the medical profession, but also the world at large, to ask the most basic questions about the rift between the duty of care and the accepted norms of medical practice. (John Burnside)

Guglani's compassion for the souls and bodies inhabiting his hospital makes this book much bigger than it appears. But Histories is not just heart - Guglani is the real deal. Some will describe him as a doctor-turned-writer. On the evidence of this remarkable debut, I would say he's a writer who also happens to be a doctor. (Michel Faber)

Economical, emotionally involving, insightful and rather beautiful . . . A luminous argument for truly seeing and listening to others and to ourselves; it is a serious tilt at working out what matters, honed in places where people are tested by such questions every day. (Aide Edemariam Guardian)

Guglani's novel is profound. His writing is poetic, his observations about the current state of medicine searing. But most importantly, this book is humane (Gabriel Weston, surgeon and author of Direct Red)

This kaleidoscopic novella shows rare skill in its structure and balance. There are no heroes in Sam Guglani's hospital, only human beings from porters to consultants negotiating their own power and fear and morality (Sarah Moss, author of The Tidal Zone)

Histories is clear-eyed, unflinching, and tender, written in hypnotic, flowing prose designed to break your heart, mend it, then break it all over again. A huge accomplishment by Guglani, whose timely, hopeful debut feels like it's always been here. A deep-rooted, sky-reaching oak of a book. (Rory Gleeson, author of Rockadoon Shore)

This book lingered with me, I couldn't shake it. Quiet, breathless, beautiful, important. Read it, tell everyone else to read it, read it again. (Daisy Johnson, author of Fen)

It's the first book I've read that seems to capture the real feel of a hospital, with all its human chaos among both patients and doctors, the sense of ideals lost and painfully recovered, the search for meaning in illness and a constant striving to be brave. Only a practising doctor could have written so boldly and authentically. (Ann Wroe, author of Six Facets of Light)

Told with such subtlety that the reader is often ambushed by realisation as to the stories being told. Sam Guglani combines the insights and empathy of a doctor, a poetic vision, and an extraordinary capacity to ventriloquise the consciousness of others. An important voice has arrived, telling new and sometimes difficult truths about love and conflict, caring and not caring, sickness and health. (Raymond Tallis, author of The Mystery of Being Human)

Olive Kitteridge meets Do No Harm in this revealing and intimate interlinked collection of stories set in a hospital, written by a doctor

Book Description Hardback. Condition: New. New copy - Usually dispatched within 4 working days. Olive Kitteridge meets Do No Harm in this revealing and intimate interlinked collection of stories set in a hospital, written by a doctor. Seller Inventory # B9781786483805