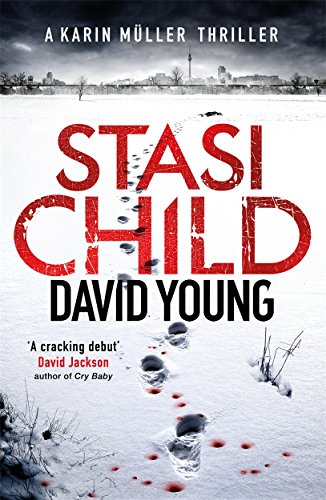 East Berlin, 1975. When Oberleutnant Karin Müller is called to investigate a teenage girl's body at the foot of the Wall, she imagines she's seen it all before. But when she arrives she realises this is a death like no other. It seems the girl was trying to escape - but from the West. Müller is a member of the People's Police, but in East Germany her power only stretches so far. The Stasi want her to discover the identity of the girl, but assure her the case is otherwise closed - and strongly discourage her from asking questions. The evidence doesn't add up, and it soon becomes clear the crime scene has been staged. But this is not a regime that tolerates a curious mind, and Müller doesn't realise that the trail she's following will lead her dangerously close to home... Stasi Child is David Young's brilliant and page-turning debut novel, perfect for fans of Child 44 and The Lives of Others. This paperback book has 403 pages and measures: 19.7 x 12.7 x 2.7cm.

An exceptionally fluid mystery that holds the reader gripped. Reminiscent of Fatherland and AD Miller's Snowdrops, Stasi Child heralds a bold new voice - and character - in historical crime. * NetGalley Book of the Month * Deep and dark, this debut is utterly gripping, sucking you in straight from the get go. Fascinating backdrop, well observed characters and a corker of an ending. Superb. -- Nikki Owen (author of The Spider in the Corner of the Room) Stasi Child is great read - not just for the story itself (exciting and gripping as it is) - but also because it brings back most vividly a time that most of us have forgotten . . . David Young has researched the book extensively, and its believability shines through. * tripfiction.com * Stasi Child captures the mood of the time, place and ideology brilliantly . . . The fact that Stasi Child is a debut novel makes it all the more remarkable. I really hope Karin Muller returns, and in the not too distant future . . . a deeply atmospheric and haunting read. * For Winter Nights * David Young captures the claustrophobic atmosphere of the communist regime...filled with corruption, and violence, this gripping thriller, with an amazing ending, will have you racing through the pages. * Pick Me Up Magazine * A promising debut, an astutely considered novel of detection and place, redolent of dread, paranoia and suspicion. If you are a fan of Philip Kerr's Bernie Gunther series, this will appeal. Though it's stylistically more sober than Kerr's noirish novels, the Berlin background is just as authentically realised. Young demonstrates he has not only a fine heroine but a nice eye for action, claustrophobic detail and a lurking, just-under-control sense of the gothic. -- Graeme Blundell * The Australian, ARTS * A self-confessed obsessive , Young's period detail - what kind of tyre tracks Stasi official's cars left - is impressive. -- Greg Fleming * New Zealand Herald * The story may be basically at heart be a police procedural (and a grand read even then) but what sets its apart and much above is the most - painstakingly-researched and rendered - millieu it is set in - a society where anyone has to be cautiously watchful in all interactions - even be it family of friend and life for any moral individual is a struggle to maintain integrity when loyalty and obedience take higher precedence over truth * bignewsnetwork.com * The premise is brilliant and the pacing just right - but what really carries it is the hauntingly atmospheric depiction of Berlin under communism's iron fist --Rod Reynold * Metro *

East Yorkshire-born David Young began his East German-set crime series on a creative writing MA at London's City University when Stasi Child - his debut - won the course prize. The novel went on to win the 2016 CWA Historical Dagger, and both it and the 2017 follow-up, Stasi Wolf, were longlisted for the Theakston Old Peculier Crime Novel of the Year. His novels have been sold in eleven territories round the world. Before becoming a full-time author, David was a senior journalist with the BBC's international radio and TV newsrooms for more than 25 years. He writes in his Twickenham garden shed and in a caravan on the Isle of Wight. You can follow him on Twitter @djy_writer