Items related to Blood's Game: In the court of Charles II fortune...

Donald, Angus Blood's Game: In the court of Charles II fortune favours the bold . . . But one false step could prove fatal (Holcroft Blood 1)

Blood's Game: In the court of Charles II fortune favours the bold . . . But one false step could prove fatal (Holcroft Blood 1) 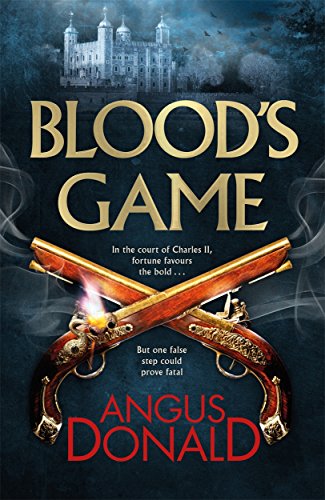 THE THRILLING NEW SERIES FROM THE BESTSELLING AUTHOR OF THE 'OUTLAW CHRONICLES'. PERFECT FOR FANS OF BERNARD CORNWELL AND CONN IGGULDEN.

AFTER THE TUDORS CAME THE STUARTS . . .

Holcroft Blood has entered the employ of the Duke of Buckingham, one of the most powerful men in the kingdom after the king. It is here that his education really begins. With a gift for numbers and decoding ciphers, Holcroft soon proves invaluable to the Duke, but when he's pushed into a betrayal he risks everything for revenge.

His father, Colonel Thomas Blood, has fallen on hard times. A man used to fighting, he lives by his wits and survives by whatever means necessary. When he's asked to commit treason by stealing the crown jewels, he puts himself and his family in a dangerous situation - one that may end at the gallows.

As the machinations of powerful men plot to secure the country's future, both father and son must learn what it is to survive in a more dangerous battlefield than war - the court of King Charles II.

Angus Donald is a proper story-teller and Blood's Game is a full-throated adventure following a flesh and blood cast of engaging characters as they cross and double-cross each other around a convincingly-depicted Restoration London Source: S. G. MacLean

He [Angus Donald] brings the story to a very satisfying and tense conclusion, in a book with action and humour aplenty, setting the scene for what i feel will be a truly excellent series in the future . . . book two cannot come soon enough for me. Bravo Angus . . . loved this book Source: Parmenion Books

A stand-out historical adventure . . . Marvellous characters and a thrilling plot as the interests of father and son collide Source: The Times, review in Best Historical Fiction of the Year

This entertaining adventure is populated by some of the most celebrated personalities of the day Source: Daily Express

Donald relates the adventures of the two Bloods with relish. Both characters are instantly engaging - the reprobate Blood and the bemused Holcroft. This tale is ideal for fans of historical adventure Source: Sunday Times

Blood's Game is a thoroughly entertaining historical romp, packed full of some brilliantly colourful characters. Holcroft Blood is such a strong character and his future is an exciting one and I can't wait to follow it as he takes us away from the court of Charles II and onto the battlefield Source: For Winter Nights

Angus Donald kicked off a new series with the utterly delicious Blood's Game - the adventures of a young and peculiar hero in the court of Charles II. Source: The History Girls, included in the books of the year roundup

Written with wit, joy and charm, there's danger, skulduggery and drama aplenty to enjoy in this first outing for what promises to be another rip-roaring Angus Donald historical odyssey Source: Lancashire Evening Post

Angus Donald was born in China in 1965 and educated at Marlborough College and Edinburgh University. For over twenty years he was a journalist in Hong Kong, India, Afghanistan and London. He now works and lives in Kent with his wife and two children.

1. Blood's Game: In the court of Charles II fortune favours the bold . . . But one false step could prove fatal (Holcroft Blood 1)

3. Blood's Game: In the court of Charles II fortune favours the bold . . . But one false step could prove fatal (Holcroft Blood 1)