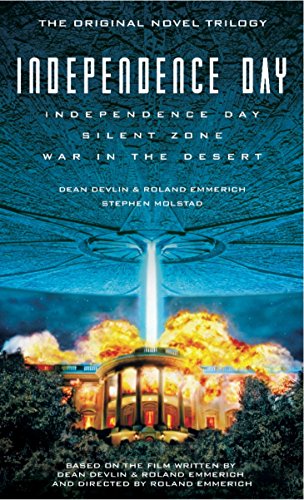 Stephen Molstad is the author of tie-ins to blockbuster movies such as Independence Day and Godzilla, as well as non-fiction books based on cult TV shows such as Doctor Who.

Book Description Paperback. Condition: New. Language: English. Brand new Book. INDEPENDENCE DAY BY DEAN DEVLIN & ROLAND EMMERICH AND STEPHEN MOLSTAD. Two days before Independence Day, the skies look as if they are on fire. All satellite communications are interrupted, as fear grips the cities of the world. When the skies return to normal, it becomes clear that a force of incredible magnitude has arrived on Earth. Its mission: to eliminate all human life on the planet.SILENT ZONE CREATED BY DEAN DEVLIN & ROLAND EMMERICH, NOVEL BY STEPHEN MOLSTAD. In the official prequel to Independence Day, Dr Brackish Okun, head scientist of Area 51, begins to suspect that a massive government cover-up has successfully buried all evidence of alien visitation throughout the years-a cover-up in which Okun is now an unwilling participant.WAR IN THE DESERT, CREATED BY DEAN DEVLIN & ROLAND EMMERICH. NOVEL BY STEPHEN MOLSTADI. t is the fourth of July. Reeling from the enemy onslaught, a few surviving military pilots gather in the Saudi Arabian desert.Two of the best fliers discover that their recent "victory" was an illusion-part of a secret ambush that will open the planet to unimaginable horror, unless several Middle Eastern nations can overcome long-standing hatreds and unite against the aliens in the fiercest hand-to-hand combat of the war. Seller Inventory # AA79781785652011

Book Description Mass Market Paperback. Condition: new. Mass Market Paperback. In celebration of the eagerly anticipated movie Independence Day: Resurgence, Titan Books collects three classic Independence Day novels in one omnibus edition, featuring: Independence Day: Novelization, (1996) The rumours of a secret government project concerning the remains of a crashed spaceship in Roswell, New Mexico, prove to be true as the brethren of the craft come calling. As panic grips the nation, all wonder exactly what these visitors from space intend. Independence Day: Silent Zone, (1998) Although the movie Independence Day captured the imaginations of millions, it also left many unanswered questions about the alien invasion. This second ID4 original novel gives fans the complete story of the courageous pilots who banded together in the Arabian desert to crush the alien City Destroyer. Independence Day: War in the Desert. (1999) When Reg Thompson, an R.A.F. pilot and instructor, survives an early attack against the apparently invulnerable City Destroyer, he retreats into the Saudi desert and hooks up with an ill-organized and fractious force of freedom fighters from the armies of several nations, including Khalid, a Saudi pilot; the beautiful Fadeela, Khalid's sister; and Faisal the Saudi prince who is their leader. Contains three official Independence Day novels: The Silent Zone prequel, the official novelization & War in the Desert. Shipping may be from multiple locations in the US or from the UK, depending on stock availability. Seller Inventory # 9781785652011