Items related to The Death of Democracy

The Death of Democracy 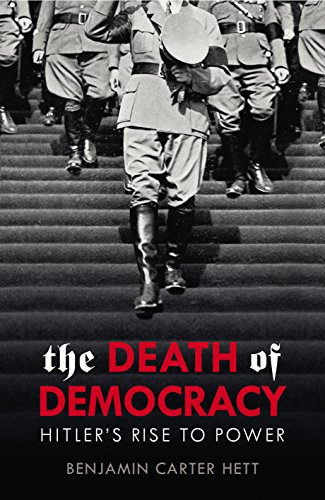 ‘Brilliant. A timely reminder of the fragility of democracy and the dangers of extreme nationalism.’ Nikolaus Wachsmann, author of KL: A History of the Nazi Concentration Camps

'In this post-truth, alternative-facts American moment, The Death of Democracy is essential reading.’ Kurt Andersen, author of Fantasyland

A revelatory account of the fall of the Weimar Republic and the rise of Hitler, based on new and award-winning research, and recently discovered archival material.

The Death of Democracy explores one of the great questions in all of human history: what caused the fall of one of the most progressive governments in twentieth-century Europe, and the rise of the most terrifying?

Drawing on extraordinary individual stories to illustrate its broader arguments, this revelatory new account presents a panoramic portrait of Germany at a turning point, focusing on the global dimension of the Nazi phenomenon as part of a widespread reaction against a world order of triumphant, cosmopolitan liberal democracy and capitalism after the First World War. This was a world situation that pushed its opponents to embrace authoritarianism, nationalism and economic self-sufficiency, kick-starting a revolution reliant upon the innovative exploitation of new media technologies, and the formidable political and self-promotional skills of its leader.

Based on award-winning research and recently discovered archival material, The Death of Democracy is an authoritative and panoramic new survey of one of the most pivotal periods in modern history, and a book with a clear and important message for the world today.

"Extremely fine... with careful prose and scholarship, with fine thumbnail sketches of individuals and concise discussions of institutions and economics, he brings these events close to us. Hett... sensitively describes a moral crisis that preceded a moral catastrophe." (Timothy Snyder The New York Times)

"Intelligent, well-informed... intriguing. Hett provides a lesson about the fragility of democracy and the danger of that complacent belief that liberal institutions will always protect us." (Gerard DeGroot The Times)

"Readable and well-researched, with the injection of fresh contemporary voices, The Death of Democracy is also a thoughtful reflection of how our time more resembles the Thirties than the Noughties." (Daily Telegraph)

"Benjamin Carter Hett deftly summarises this dismal period... Hett refrains from poking the reader with too many obvious contemporary parallels, but he knew what he was doing when he left "German" out of his title. On the book's final page, he lays his cards on the table... "Suddenly, the whole thing looks close and familiar." Yes, it does." (Alex Ross New Yorker)

"A superb explanation of how democracy died in Weimar Germany. Too much of this story seems painfully familiar today." (Gerard DeGroot The Times, 'Books of the Year')

A landmark account of the fall of the Weimar Republic and the rise of Hitler, based on award-winning research, and recently discovered archival material.

1. The Death of Democracy

Book Description Paperback. Condition: Very Good. The book has been read, but is in excellent condition. Pages are intact and not marred by notes or highlighting. The spine remains undamaged. Seller Inventory # GOR009142436

2. The Death of Democracy

Book Description William Heinemann, 2018. Hardcover. Condition: Used; Good. **SHIPPED FROM UK** We believe you will be completely satisfied with our quick and reliable service. All orders are dispatched as swiftly as possible! Buy with confidence! Aloysius Ihezie. Seller Inventory # 3844493