Items related to Chavs: The Demonization of the Working Class

Owen Jones Chavs: The Demonization of the Working Class

Chavs: The Demonization of the Working Class 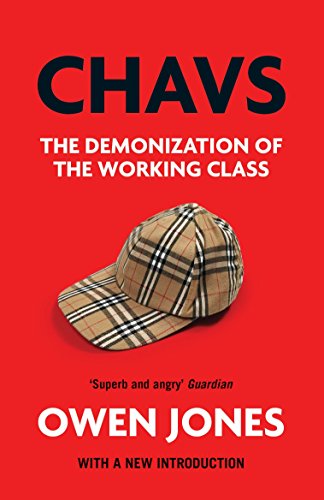 In modern Britain, the working class has become an object of fear and ridicule. From Little Britain's Vicky Pollard to the demonization of Jade Goody, media and politicians alike dismiss as feckless, criminalized and ignorant a vast, underprivileged swathe of society whose members have become stereotyped by one, hate-filled word: chavs. In this acclaimed investigation, Owen Jones explores how the working class has gone from 'salt of the earth' to 'scum of the earth.' Exposing the ignorance and prejudice at the heart of the chav caricature, he portrays a far more complex reality. The chav stereotype, he argues, is used by governments as a convenient fig leaf to avoid genuine engagement with social and economic problems and to justify widening inequality. When Chavs was first published in 2011 it opened up the discussion of class in Britain. Then, in the public debate after the riots of that summer, Owen Jones's thesis was proved right - the working class were the scapegoats for everything that was wrong with Britain. This new edition includes a new chapter, reflecting on the overwhelming response to the book and the situation in Britain today.

"A passionate and well-documented denunciation of the upper-class contempt for the proles that has recently become so visible in the British class system." - Eric Hobsbawm, Guardian

"A bold attempt to rewind political orthodoxies; to reintroduce class as a political variable... It moves in and out of postwar British history with great agility, weaving together complex questions of class, culture and identity with a lightness of touch. Jones torches the political class to great effect." - Jon Cruddas, Independent (Book of the Week)

"It is a timely book. The white working class seems to be the one group in society that it is still acceptable to sneer at, ridicule, even incite hatred against. ... Forensically ... Jones seeks to explain how, thanks to politics, the working class has shifted from being regarded as 'the salt of the earth to the scum of the earth'." - Times (Book of the Week)

"Seen in the light of the riots and the worldwide Occupy protests, his lucid analysis of a divided society appears uncannily prescient." - Matthew Higgs, Artforum

"As with all the best polemics, a luminous anger backlights his prose." - Economist

"A lively, well-reasoned and informative counterblast to the notion that Britain is now more or less a classless society." - Sean O'Hagan, Observer

"A trenchant exposure of our new class hatred and what lies behind it." - John Carey, author of The Intellectuals and the Masses

"The stereotyping and hatred of the working class in Britain, documented so clearly by Owen Jones in this important book, should cause all to flinch. Reflecting our high levels of inequality, the stigmatization of the working class is a serious barrier to social justice and progressive change."
- Kate Pickett and Richard Wilkinson, authors of The Spirit Level
"Eloquent and impassioned."
- Andrew Neather, Evening Standard
"Jones's analysis of the condition of the working class is very astute ... A book like this is very much needed for the American scene, where the illusion is similarly perpetuated by the Democrats that the middle-class is all that matters, that everyone can aspire to join the middle-class or is already part of it." - Huffington Post

"Everybody knows what a chav is, it seems, but no one is a chav. But then it's a word unlike any other in current usage... A new book, Chavs: The Demonisation of the Working Class, by first-time author Owen Jones... has thrown the word into the spotlight all over again." - Carole Cadwalladr, Observer

"[A] thought-provoking examination of a relatively new yet widespread derogatory characterization of the working class in Britain ... edifying and disquieting in equal measure." - Publishers Weekly

"A fiery reminder of how the system has failed the poor." - Peter Hoskin, Daily Beast

"Mr. Jones's book is a cleareyed examination of the British class system, and it poses this brutal question: 'How has hatred of working-class people become so socially acceptable?' His timely answers combine wit, left-wing politics and outrage." - Dwight Garner, New York Times

Owen Jones is a writer, columnist, commentator and activist. He writes for the Guardian, Independent and New Statesman, appears on television and radio, and is a tireless public speaker. He lives in London.

1. Chavs: The Demonization of the Working Class

2. Chavs: The Demonization Of The Working Class

3. Chavs: The Demonization of the Working Class

4. Chavs: The Demonization of the Working Class

5. Chavs: The Demonization of the Working Class