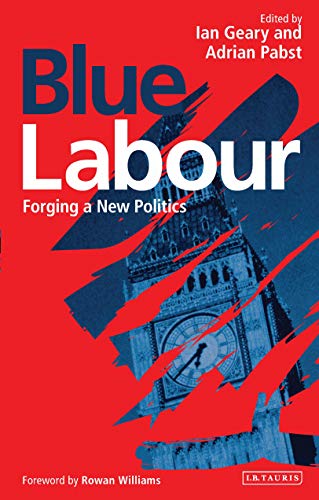 In the aftermath of the global economic crisis, and the worst recession for over seventy years, Britain has witnessed one of the most turbulent eras in politics since the Second World War. The dominant political and capitalistic system has come under close scrutiny; and the 2008 financial crash has cast serious doubt on the economic and social liberalism of both Thatcherism and Blairism. The Blue Labour movement addresses the fact that neither nationalisation nor privatisation has delivered lasting prosperity or stability. Critiquing the dominance in Britain of a social-cultural liberalism associated with the left and a free-market liberalism linked to the right, Blue Labour blends a 'progressive' commitment to greater economic equality with a more 'conservative' disposition emphasising personal loyalty, family, community and locality. Seeking to move beyond the centrist pragmatism of Blair and Cameron, this essential work speaks to the needs of diverse people and communities across the country. It is the manifesto of a vital new force in politics: one that could define the thinking of the next generation and beyond.

'a book of and about the future... the collection is an illuminating and at times moving account of a party that would like to reconnect with its base and its raison d'être... Ian Geary and Adrian Pabst are to be congratulated. This is a wonderful collection that presents an alternative not yet pursued.' --Philip Blond, New Statesman

'a constructive alternative... The future Glasman and his collaborators envisage is vibrant, spiritual and communal a truly post-liberal movement.' --James Mumford, Standpoint

'a collection of erudite, philosophical essays... win or lose the election these ideas will be in play... Through them runs a steel core, a determination to remake and remodel the Labour Party.' --Mark Mardell, BBC News

Ian Geary is an Executive Member of Christians on the Left (formerly the Christian Socialist Movement); Adrian Pabst is Senior Lecturer in Politics at the University of Kent and the author of Metaphysics: The Creation of Hierarchy (2012).