Items related to Pirate Hunters: Treasure, Obsession and the Search...

Pirate Hunters: Treasure, Obsession and the Search for a Legendary Pirate Ship 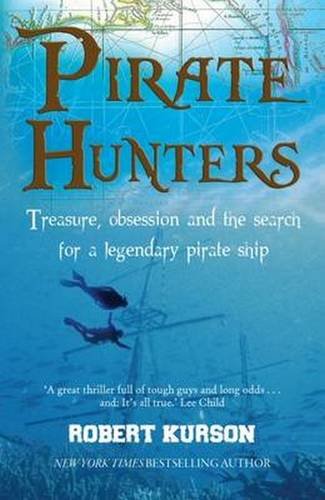 Captained by English nobleman-turned-pirate Joseph Bannister, the Golden Fleece was a pirate ship sunk by the Royal Navy in 1686 taking with it many fortunes' worth of gold. When present-day adventurers John Chatterton and John Mattera hear of it, they know they have to risk everything to get their hands on it.Bestselling author Robert Kurson not only recreates the break-neck excitement of their search for the lost ship, but also vividly re-imagines life on the high seas in the Golden Age of piracy in this thrilling true-life adventure.

"Action and adventure on land and sea - you can't ask for more. But Robert Kurson raises the ante in Pirate Hunters with an array of mystery and a fleet of colorful characters spanning four centuries. This is a great summer read!" -- Michael Connelly

"Pirate Hunters is a fantastic book, an utterly engrossing and satisfying read. It tells the story of the hunt for the rare wreck of a pirate ship, which had been captained by one of the most remarkable pirates in history. This is a real-life Treasure Island, complete with swashbuckling, half-crazy treasure hunters and vivid Caribbean settings - a story for the ages." -- Douglas Preston

"A terrific read. I was pulled in from page one. Kurson brings us face to face with some of the most swashbuckling pirates ever to sail the Caribbean, even as he takes us underwater on a high-tech quest to discover the relics they left behind." -- Daniel James Brown

"There's nothing in the world like buried treasure - and people hungry and obsessed enough to risk their lives for it. Pirate Hunters isn't just a good story - it's a true one. Searching for the souls of its explorers, it takes you to the far tip of the plank and plunges you deep to the bottom of the ocean." -- Brad Meltzer

"Pirate Hunters is a gripping account of two courageous divers' quest to uncover the shipwrecked vessel of Joseph Bannister, one of history's most infamous pirates. Robert Kurson will keep you on the edge of your seat in this high-stakes journey around the globe that ultimately teaches these explorers about much more than an old ship." -- Sen. John McCain

"Kurson's own enthusiasm, combined with his copious research and an eye for detail, makes for one of the most mind-blowing pirate stories of recent memory." --Publishers Weekly

"Wonderful ... reads like a novel but is entirely based on an amazing journey to get into the mind of a pirate ... gives the reader a genuine feeling of being out there with the team, sharing their anguish, frustration, need for patience and every twist and turn of their adventure - everything that makes for a terrific read. I wonder if someone will make a film of the book one day..." --Alex Khachadourian, DIVER magazine

"A fascinating read... The tension throughout is palpable, the history enthralling. This is proof that, given a skilled narrator, some of the best tales can be true." -- neverimitate.wordpress.com

"I decided to give it a try as it was recommended by 2 of my favourite authors Michael Connelly and Lee Child, and I'm glad I did ... Pirate Hunters is a fantastic book. As I said at the beginning pirate novels are not generally my thing but once I started this book I was finished in 2 days. Fast-paced and filled with action, suspense, adventure and best of all, it's all true! [...] A thoroughly enjoyable and extremely well-written true-life adventure. The story flows well blending history, facts and action together making sure that you keep turning the page. I highly recommend you read and you don't even have to like pirates!" -- What's Good to Do

"A great read ... if you enjoy adventure and diving then I would definitely recommend this book" -- Mark E Newman, SimplyScuba.com

"Told with such a contagious delight and reverence for the period that it's impossible not to be caught up in the thrill of the hunt and the enthusiasm ... In Pirate Hunters, Kurson not only injects excitement and enthusiasm into the pursuit of The Golden Fleece but re-injects a sense of passion and true adventure into a period of history so easily nullified by over-exposure. As is so often the case, reality can be so much more interesting than fiction and no amount of Hollywood script writers can do justice to the era in such a way as Kurson has done in just a few hundred pages. As an account of a search for sunken wonder, Pirate Hunters is both compelling and factual - a well balanced mix of fact and gripping narrative. As a taster, an introduction to the fascinations of the Golden Age of Piracy... it's even better." -- Mumbling About Music

"The author sensibly breaks up the book with accounts of other treasure hunters (who seem like a fascinating bunch in their own right), as well as a history of Caribbean piracy, and speculation about the wreck's location. Meanwhile there are many false trails that Kurson cleverly weaves into the book to keep the reader guessing ... The wider issue of treasure hunting and salvage rights in the late 2000s is a recurring theme, and Chatterton and Mattera may be the last of a small number of people with the opportunity and nouse to hunt down a valuable piece of ancient history in this fashion. For that reason alone, the book is definitely worth a read." -- British Diver

"It tells the story of how Chatterton and Mattera got the bug for diving, the dangers involved, the thrill of diving comes alive, even if like myself you have never donned a scuba suit you can sense the thrill that comes from exploring the deep. I just wish after reading this book that I was thirty years younger ... This is a book which took over two years to write and the research and interviews that went into it are quite remarkable." -- Army Rumour Service

"This was brilliant ... This is a must read book for anybody wanting to learn more about the real Pirates of the Caribbean. It really does read like a fast paced thriller and I sometimes forgot I was reading a true story. A real swashbuckler of a read that has piqued my interest in underwater salvage." --The Book Magnet

Robert Kurson is the author of the runaway bestseller Shadow Divers as well as Crashing Through. After a law degree from Harvard Law School, he began his writing career at the Chicago Sun-Times as a data entry clerk, a position which led to a full-time features writing job. In 2000, Esquire published 'My Favorite Teacher', his first magazine story, which became a finalist for a National Magazine Award. Based in Chicago, he is currently a contributing editor to Esquire.

1. Pirate Hunters: Treasure, Obsession and the Search for a Legendary Pirate Ship (Paperback)

Book Description Elliott & Thompson Limited, United Kingdom, 2015. Paperback. Condition: New. Language: English. Brand new Book. Captained by English nobleman-turned-pirate Joseph Bannister, the Golden Fleece was a pirate ship sunk by the Royal Navy in 1686 taking with it many fortunes' worth of gold. When present-day adventurers John Chatterton and John Mattera hear of it, they know they have to risk everything to get their hands on it.Bestselling author Robert Kurson not only recreates the break-neck excitement of their search for the lost ship, but also vividly re-imagines life on the high seas in the Golden Age of piracy in this thrilling true-life adventure. Seller Inventory # AA79781783962198

3. Pirate Hunters: Treasure, Obsession and the Search for a Legendary Pirate Ship

4. Pirature Hunters: Treasure Obsession and the Search for a Legendary Pirate Ship

5. Pirate Hunters: Treasure, Obsession and the Search for a Legendary Pirate Ship

6. Pirate Hunters: Treasure, Obsession and the Search for a Legendary Pirate Ship

7. Pirate Hunters: Treasure, Obsession and the Search for a Legendary Pirate Ship