Items related to Glass Half Full: A Positive Journey to Living Alcohol-Free... 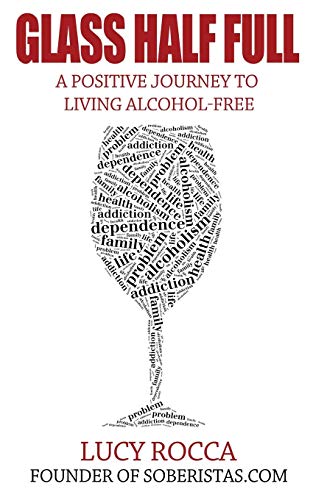 Glass Half Full by Lucy Rocca, best-selling author of The Sober Revolution. In April 2011, Lucy Rocca woke up in a hospital bed with no memory of how she had ended up there. After accepting that her drinking had spiralled out of control, she made the decision there and then to never touch alcohol again. However, the early days were a challenge, and Lucy began recording her journey in a blog as a way of helping herself move forward to a happy and sober future. For someone who defined herself by her love of drinking for over twenty years, letting go of the booze crutch was initially a challenge, but over time, Lucy began to realise how much happier she was living alcohol-free. Glass Half Full is the story of her journey from hopelessly devoted wine fiend to sober and truly happy for the first time in her adult life. As the founder of Soberistas.com, Lucy’s blog also provides motivational and inspirational support for those seeking an alcohol-free life.

Lucy Rocca quit drinking in 2011 and launched the social network website, soberistas.com, the following year. Since setting up Soberistas, Lucy has written five books, all on the subject of quitting drinking. She now works full time as both the director of Soberistas, and running her online store The Rest Is History, which sells clothing and apparel designed for sober warriors. Lucy has recently opened an online coaching practice aimed at people who want to discover a new direction in life and rebuild self-esteem, Lucy Rocca Life Coaching. In her spare time she loves hanging out with her daughters, dogs and friends, running about in the countryside, listening to music, experimenting in the kitchen, and doing lots of yoga.

Book Description Condition: Good. A+ Customer service! Satisfaction Guaranteed! Book is in Used-Good condition. Pages and cover are clean and intact. Used items may not include supplementary materials such as CDs or access codes. May show signs of minor shelf wear and contain limited notes and highlighting. Seller Inventory # 1783755881-2-4

Book Description Condition: Good. Ships from the UK. Former library book; may include library markings. Used book that is in clean, average condition without any missing pages. Seller Inventory # 15710451-20

Book Description Condition: Very Good. Ships from the UK. Former library book; may include library markings. Used book that is in excellent condition. May show signs of wear or have minor defects. Seller Inventory # 14101065-6

Book Description Condition: Fair. Independent family-run bookstore for over 50 years! Buy with confidence! Book is in acceptable condition with wear to the pages, binding, and some marks within. Seller Inventory # bk1783755881xvz189zvxacp

Book Description Paperback. Condition: Very Good. Item is in very good condition. If supplemental codes/CDs for textbooks are required please contact us prior to purchasing as they may be missing. Photos are stock pictures and not of the actual item. Seller Inventory # DS-1783755881-2

Book Description Paperback. Condition: Very Good. The book has been read, but is in excellent condition. Pages are intact and not marred by notes or highlighting. The spine remains undamaged. Seller Inventory # GOR006458959