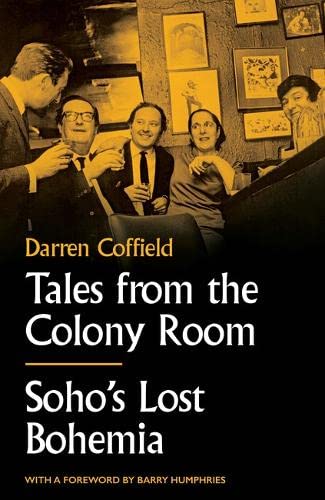 1. Tales From The Colony Room

Book Description Hardback. Condition: New. Language: English. Brand new Book. 'Entertaining, shocking, uproarious, hilarious . . . like eavesdropping on a wake, as the mourners get gradually more drunk and tell ever more outrageous stories' Sunday TimesThis is the definitive history of London's most notorious drinking den, the Colony Room Club in Soho. It's a hair-raising romp through the underbelly of the post-war scene: during its sixty-year history, more romances, more deaths, more horrors and more sex scandals took place in the Colony than anywhere else.Tales from the Colony Room is an oral biography, consisting of previously unpublished and long-lost interviews with the characters who were central to the scene, giving the reader a flavour of what it was like to frequent the Club. With a glass in hand you'll move through the decades listening to personal reminiscences, opinions and vitriol, from the authentic voices of those who were actually there.On your voyage through Soho's lost bohemia, you'll be served a drink by James Bond, sip champagne with Francis Bacon, queue for the loo with Christine Keeler, go racing with Jeffrey Bernard, get laid with Lucian Freud, kill time with Doctor Who, pick a fight with Frank Norman and pass out with Peter Langan. All with a stellar supporting cast including Peter O'Toole, George Melly, Suggs, Lisa Stansfield, Dylan Thomas, Jay Landesman, Sarah Lucas, Damien Hirst and many, many more. Seller Inventory # AA99781783528165

4. Tales from the Colony Room

5. Tales from the Colony Room (Hardcover)

Book Description Hardcover. Condition: new. Hardcover. 'Entertaining, shocking, uproarious, hilarious . . . like eavesdropping on a wake, as the mourners get gradually more drunk and tell ever more outrageous stories' (Sunday Times) Shipping may be from multiple locations in the US or from the UK, depending on stock availability. Seller Inventory # 9781783528165

6. Tales From The Colony Room

7. Tales From The Colony Room

9. Tales From The Colony Room