Items related to In Two Minds: A Biography of Jonathan Miller

Kate Bassett In Two Minds: A Biography of Jonathan Miller

In Two Minds: A Biography of Jonathan Miller 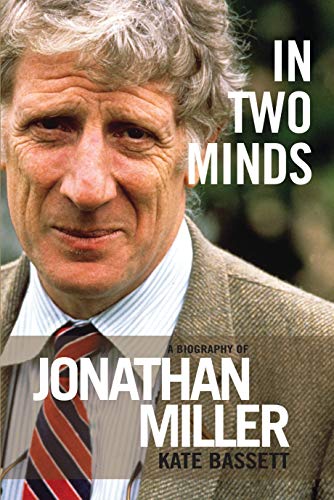 'a remarkable portrait of a complex and Coleridgean figure.' 5 stars --Telegraph

'An admirably thorough job of a biography: sympathetic, deeply researched, informed by long conversations with Miller and dozens of friends, colleagues and, occasionally, enemies.' --The Spectator

'Sir Jonathan Miller is a remarkable man. As one of the great egocentrics of his generation, he would not question this judgement... Ms Bassett's first-class authorised biography does not mask Sir Jonathan's weaknesses, but she says that, in conversation, his flaws seem more tragicomic than intolerable the bile and bitterness never quite obliterate the man's warmth.' --The Economist

'Kate Bassett's absorbing, in-depth and erudite biography of Miller ... produce(s) an appealingly multifaceted figure of a man' --The Observer

'Kate Bassett's brilliant, exhaustively researched biography gathers it all together and reminds us what a truly astonishing man he is.' --Jewish Chronicle

Kate Bassett is the theatre critic for the Independent on Sunday and a freelance arts journalist. She has previously worked for The Times and the Daily Telegraph, also the Guardian, Time Out, the TLS and the New Statesman, writing features and reviews on film, books, dance, comedy and other subjects. She has served on many awards panels, chairing the Perrier Comedy Awards twice. She also teaches and gives platform talks.

1. IN TWO MINDS: A BIOGRAPHY OF JON

2. In Two Minds: a Biography of Jonathan Miller

3. In Two Minds : A Biography of Jonathan Miller

4. In Two Minds: A Biography of Jonathan Miller (Paperback)

Book Description Bloomsbury Publishing PLC, United Kingdom, 2015. Paperback. Condition: New. Reprint. Language: English. Brand new Book. In Two Minds is the first comprehensive biography of Jonathan Miller - the story of one of post-war Britain's most intriguing polymaths. Descended from immigrants who fled Tsarist anti-Semitism to become shopkeepers in Ireland and London's East End, Miller was born into an intellectual milieu, between Bloomsbury and Harley Street - the son of a novelist and a leading child psychiatrist. Miller trained as adoctor but then forged a career as a stellar comedian and as a world-renowned theatre and opera director.He is a controversial humorist, public intellectual and TV personality. As a star in the groundbreaking satirical revue Beyond the Fringe, he shot to fame alongside Peter Cook, Dudley Moore and Alan Bennett. His expertise and interests encompass many areas, from medicine (he wrote and presented the hugely acclaimed BBC documentary series The Body in Question) to the history of art, Mozart, atheism and the nature of laughter.Jonathan Miller is one of the most multi-talented Britons of his generation, celebrated for his dazzling intelligence and anti-establishmentarian wit. Drawing on in-depth interviews, this is an entertaining and illuminating portrait of a fascinatingly complex man. Seller Inventory # AAJ9781783190898

5. IN TWO MINDS: A BIOGRAPHY OF JON

6. IN TWO MINDS: A BIOGRAPHY OF JON

7. IN TWO MINDS: A BIOGRAPHY OF JON

Book Description Paperback. Condition: New. Paperback. New in paperback, In Two Minds is the first comprehensive biography of Jonathan Miller - the story of one of post-war Britain's most intriguing polymaths. Descended from immigrants who fle.Shipping may be from multiple locations in the US or from the UK, depending on stock availability. 488 pages. 0.381. Seller Inventory # 9781783190898