Items related to The Oberon Book of Monologues for Black Actors: Classical... 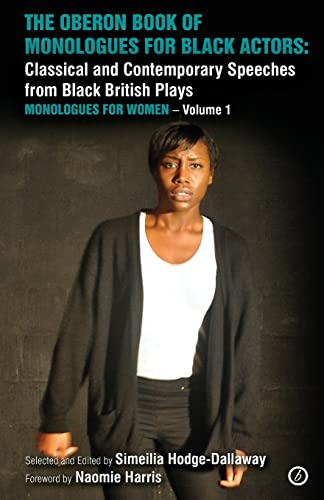 Oberon Book of Monologues for Black Actors: Classical and Co

Simeilia Hodge-Dallaway was born in East London to West Indian parents. Simeilia trained as a theatre director at the Young Vic Theatre and the Royal National Theatre. Her passion for increasing diversity within the arts industry has enabled her to work as a director, producer, audience development officer and facilitator in reputable theatres and schools nationally and internationally. Simeilia has been affliated with theatre s such as National Theatre, Theatre Royal Stratford East, Young Vic Theatre, Royal Exchange Theatre (Manchester), West Yorkshire Playhouse, Arcola Theatre, Eclipse Theatre, Kali Theatre Company, Baxter Theatre (South Africa), to name but a few. Simeilia has devised and facilitated workshops about Black British plays to a wide range of arts organisations and universities. More recently her Diversity in Plays and Monologue short course opened at Central School of Speech and Drama in 2013. Simeilia is currently producing Voices from the Black Row , a series of short film documentaries about Black British plays.

Book Description Bloomsbury Publishing PLC, United Kingdom, 2014. Paperback. Condition: New. New. Language: English. Brand new Book. Foreword by Naomie HarrisHow many Black British plays can you name?Inspired by both classical and contemporary plays, The Oberon Book of Monologues for Black Actresses gives readers an insight into some of the best cutting-edge plays written by black British playwrights, over the last sixty years. This collection features over twenty speeches by Britain's most prominent black dramatists. The monologues represent a wide-range of themes, characters, dialects and styles. Suitable for young people and adults, each selection includes production information, a synopsis of the play, a biography of the playwright and a scene summary. The aim of this collection is that actors will enjoy working on these speeches, using them to help strengthen their craft, and by doing so, help to ensure these plays are always remembered. Seller Inventory # AA79781783190560

3. The Oberon Book of Monologues for Black Actors: Women: Classical and Contemporary Speeches from Black British Plays (Paperback or Softback)