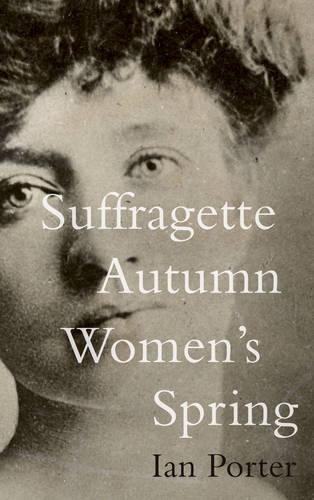 The story begins in spectacular, if shocking fashion, aboard the Titanic as it's sinking. An important scene, which Ruby later realises was the genesis of her becoming a Suffragette, takes place in a lifeboat. Ruby and Nashey are left traumatised and horrified not just by the disaster itself, but by the failures of the ship's officers. Ruby is also profoundly affected by the misplaced trust in, and subservience to, these men. Readers are then taken to New York, and on to Halifax, Nova Scotia, before the novel unfolds in Suffragette London, 1912-1914. Much of the story takes place within the militant struggle for Votes for Women, into which both main characters become drawn through different avenues. Ruby gets involved in Mrs Pankhurst's WSPU, which sees her imprisoned, hunger-striking and being force-fed. Nashey is initially interested in social change rather than the vote but a different Pankhurst working down in the East End impresses upon him that the former will follow the latter. Through the five p's publicity stunts, protests, political speeches, prison torture and police tactics we see the lengths to which the women and government went to ensure they would prevail. A main character then questions the direction the movement is taking. But out of this apparent Suffragette autumn comes a women s spring... Suffragette Autumn Women's Spring is, predictably, a fast-paced page turner, but characterisation and interpersonal relationships are important themes, brought in through cracking dialogue. This gripping work of historical fiction will appeal primarily to women and has been inspired by a number of sources, including Sylvia Pankhurst and her books on the Suffragette movement, Hilary Mantel and Arthur Morrison.

Ian Porter is an ex-ski journalist who gave up the day job to devote time to his passions - novel writing and historical research. His first book, Whitechapel, a social history novel set in 1888 has been well received. Ian's particular interest is 19th/20th century women's history, so naturally chose to set his 2nd novel in the world of Suffragettes.

Book Description Paperback. Condition: Very Good. The book has been read, but is in excellent condition. Pages are intact and not marred by notes or highlighting. The spine remains undamaged. Seller Inventory # GOR006361419

Book Description Matador 01/02/2014, 2014. Condition: Very Good. Shipped within 24 hours from our UK warehouse. Clean, undamaged book with no damage to pages and minimal wear to the cover. Spine still tight, in very good condition. Remember if you are not happy, you are covered by our 100% money back guarantee. Seller Inventory # 6545-9781783063437

Book Description Matador 01/02/2014, 2014. Condition: Very Good. This book is in very good condition and will be shipped within 24 hours of ordering. The cover may have some limited signs of wear but the pages are clean, intact and the spine remains undamaged. This book has clearly been well maintained and looked after thus far. Money back guarantee if you are not satisfied. See all our books here, order more than 1 book and get discounted shipping. . Seller Inventory # 7719-9781783063437

Book Description Matador 01/02/2014, 2014. Condition: Good. Will be shipped promptly from UK warehouse. Book is in good condition with no missing pages, no damage or soiling and tight spine. There may be some dog-eared pages showing previous use but overall a great book. Seller Inventory # 9053-9781783063437

Book Description Matador, 2014. Paperback. Condition: Used; Good. **Simply Brit** Shipped with Premium postal service within 24 hours from the UK with impressive delivery time. We have dispatched from our book depository; items of good condition to over ten million satisfied customers worldwide. We are committed to providing you with reliable and efficient service at all times. Seller Inventory # 1483345

Book Description Matador, 2014. Paperback. Condition: Used; Good. **SHIPPED FROM UK** We believe you will be completely satisfied with our quick and reliable service. All orders are dispatched as swiftly as possible! Buy with confidence! Aloysius Ihezie. Seller Inventory # 2061211

Book Description Troubador Publishing, 2014. Condition: Good. UK ed. Ships from the UK. Former Library book. Shows some signs of wear, and may have some markings on the inside. Seller Inventory # GRP84271698