Items related to The Girls Who Walked Away: Fairfield Girls, Their Lives...

Anne McGarry The Girls Who Walked Away: Fairfield Girls, Their Lives and Times and the Female Struggle for Equality 1796-2013

The Girls Who Walked Away: Fairfield Girls, Their Lives and Times and the Female Struggle for Equality 1796-2013 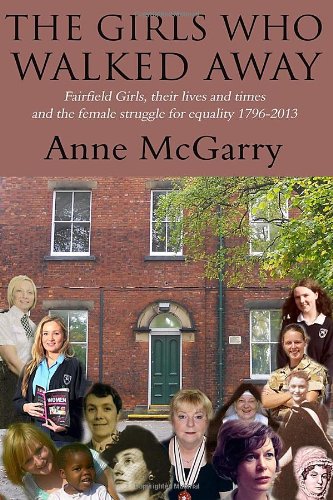 Women have come a long way since 1796, and this is the story of that journey. Anne McGarry has delved deep into many archives, corresponded and met with people in many parts of the world to bring us this very human story of the girls of Fairfield High School in Droylsden, near Manchester. Although the historical and social background of women is explored by discussing contemporary literature and political reform, it is mainly through the lives of girls who went to one of England's oldest girls' schools (now a comprehensive) that readers experience what it was really like to be a woman during this turbulent period of female emancipation. Anne has used the school as a microcosm of women's evolving role in society, and by taking the girls' life stories she throws a wider light onto their changing status. Although she found many astounding examples of the derision that women were subjected to, it is, overall, a story of individual heroism and perseverance. Each generation has played its part, from the Georgian and Regency period, right through to the present day. The book is a stimulating and wide-ranging story about women through four centuries. It looks at the struggles they faced to achieve an education and an independent life and the abuse they were subjected to along the way. There are many fascinating case studies to illustrate this, from a famous missionary wife in the 1820s, an Army Nurse in the First World War and an escapee from Nazi Germany, to a Squadron Leader who, as well as being a wife and mother, served in Afghanistan in 2009. The Girls Who Walked Away will appeal to all those who are interested in social and local history, education and women's emancipation. It provides a sensitive view of the past and an empathy that statistics alone cannot give.

Anne McGarry has had a varied career. She worked for seven years as part of the production team for a television news programme and after spending ten years bringing up three daughters she continued her education, graduating from Manchester University as a forty two year old mature student. Since then, Anne has worked as a teacher in inner-city comprehensive schools, as a researcher for a financial institution and as an insolvency administrator.