Items related to The Paperboy 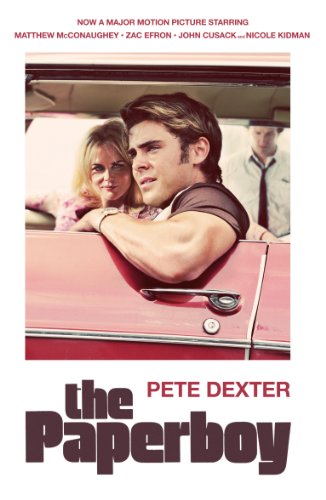 The sun is rising over Moat County, Florida, when Sheriff Thurmond Call is found on the highway, gutted like an alligator. A local redneck is tried, sentenced, and set to fry. Then Ward James, hotshot investigative reporter for the Miami Times, returns to his rural hometown with a death row femme fatale who promises him the story of the decade. She's armed with explosive evidence, aiming to free - and meet - her convicted 'fiance'. With Ward's disillusioned younger brother Jack as their driver, they barrel down Florida's back roads and seamy places in search of The Story, racing flat out into a shocking head-on collision between character and fate as truth takes a back seat to headline news.

Dexter is a writer who cuts to the bone. There is not a spare word in this searing tale... A bravura performance by one of America's most original and elegiac voices. --People

Hip, hard-boiled and filled with memorable eccentrics ... The Paperboy burns with the phosphorescent atmosphere of betrayal. --Time

Pete Dexter won the US National Book Award for Fiction for Paris Trout, two Penn West Awards for Best Novel of the Year (Paris Trout and The Paperboy), and the Los Angeles Times prize for Best Novel for Train. His most recent novel, Spooner (Atlantic Books), was published to critical acclaim in 2009.

Book Description Atlantic Books, 2013. Paperback. Condition: Used; Good. Dispatched, from the UK, within 48 hours of ordering. This book is in good condition but will show signs of previous ownership. Please expect some creasing to the spine and/or minor damage to the cover. Seller Inventory # CHL6244013

Book Description Paperback. Condition: Very Good. The book has been read, but is in excellent condition. Pages are intact and not marred by notes or highlighting. The spine remains undamaged. Seller Inventory # GOR004611614

Book Description Atlantic Books, 2013. Paperback. Condition: Good. All orders are dispatched the following working day from our UK warehouse. Established in 2004, we have over 500,000 books in stock. No quibble refund if not completely satisfied. Seller Inventory # mon0003164047

Book Description Atlantic Books 07/02/2013, 2013. Condition: Very Good. Shipped within 24 hours from our UK warehouse. Clean, undamaged book with no damage to pages and minimal wear to the cover. Spine still tight, in very good condition. Remember if you are not happy, you are covered by our 100% money back guarantee. Seller Inventory # 6545-9781782391746

Book Description Atlantic Books 07/02/2013, 2013. Condition: Very Good. This book is in very good condition and will be shipped within 24 hours of ordering. The cover may have some limited signs of wear but the pages are clean, intact and the spine remains undamaged. This book has clearly been well maintained and looked after thus far. Money back guarantee if you are not satisfied. See all our books here, order more than 1 book and get discounted shipping. . Seller Inventory # 7719-9781782391746

Book Description Condition: Good. Export & Airside ed. Ships from the UK. Shows some signs of wear, and may have some markings on the inside. Seller Inventory # 16359712-20

Book Description Condition: Good. Export & Airside ed. Ships from the UK. Former Library book. Shows some signs of wear, and may have some markings on the inside. Seller Inventory # 16895023-20