Items related to Mittens from Norway: Over 40 traditional knitting patterns... 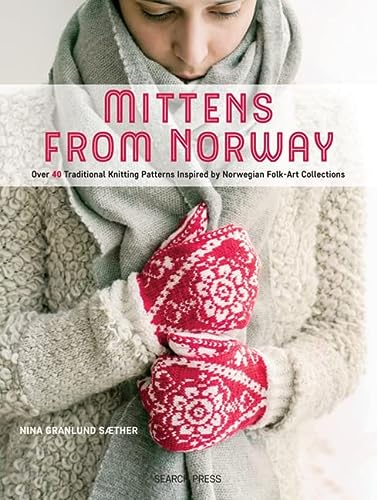 Take a trip to Norway - without ever setting down your needles! Let Nina Granlund Sćther guide you through Norway's mountains, rivers, and countryside as you delve into 400 years of Scandinavian knitting history.
Reconstructed from historical sources or drawn directly from the author's familiarity with Norwegian pattern knitting, more than 40 textile treasures are collected here, from the well-loved Selbu mittens, to lesser-known delights whose fascinating origins have been carefully traced. Resting on a foundation of formidable research, with stunning photographs by Guri Pfeifer and clear, helpful pattern charts, Mittens from Norway is a brilliant combination of design inspiration and historical reference that belongs on every knitter's bookshelf.

If you love traditional patterns you will love this book. Who does not like mittens? They are also a relatively quick knit for gifts. There is almost a pattern a week if you knit them all! --Yarnsandfabrics.co.uk

Nina Granlund Sćther grew up in Asker, Norway, just outside Oslo. Her love and interest for knitting, sewing, embroidery and crochet started before going to school. She is educated as a craft teacher, and worked for a short time in high school. In 1987 she started her career as a journalist in Norsk Husflid, a Norwegian Arts and Crafts Magazine. Today she works as an editor in chief in Hus & Bolig, a magazine about houses and property. In 2013 she was honoured for her work by The Norwegian Specialised Press Association.

Sćther has written several books about arts and crafts, and makes also designs for some Norwegian magazines. Making Cushions and Pillows is her first book published outside Norway. She is creating original and visually striking craft in a Scandinavian-influenced tradition.

Buy Used
Condition: Good
A few small marks or stains to... Learn more about this copy

Book Description Paperback. Condition: Good. A few small marks or stains to the page edges/pages Good condition is defined as: a copy that has been read but remains in clean condition. All of the pages are intact and the cover is intact and the spine may show signs of wear. The book may have minor markings which are not specifically mentioned. Most items will be dispatched the same or the next working day. Seller Inventory # wbb0020682374

Book Description Condition: Very Good. Ships from the UK. Former library book; may include library markings. Used book that is in excellent condition. May show signs of wear or have minor defects. Seller Inventory # 18269263-20

Book Description Condition: Good. A+ Customer service! Satisfaction Guaranteed! Book is in Used-Good condition. Pages and cover are clean and intact. Used items may not include supplementary materials such as CDs or access codes. May show signs of minor shelf wear and contain limited notes and highlighting. Seller Inventory # 1782215409-2-4