Items related to The Curse of the House of Foskett (The Gower Street...

Kasasian, M.R.C. The Curse of the House of Foskett (The Gower Street Detective Series) 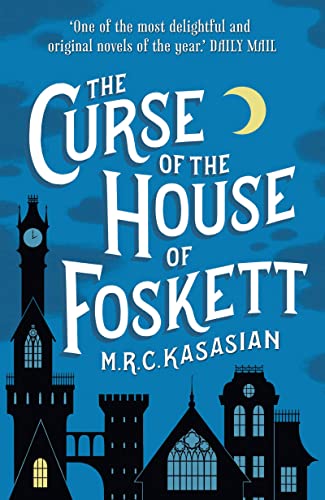 125 Gower Street, 1882: Sidney Grice once had a reputation as London's most perspicacious personal detective. But since his last case led an innocent men to the gallows, business has been light. Listless and depressed, Grice has taken to lying in the bath for hours, emerging in the evenings for a little dry toast and a lot of tea. Usually a voracious reader, he will pick up neither book nor newspaper. He has not even gathered the strength to re-insert his glass eye. His ward, March Middleton, has been left to dine alone. Then an eccentric member of a Final Death Society has the temerity to die on his study floor. Finaly Sidney and March have an investigation to mount - an investigation that will draw them to an eerie house in Kew, and the mysterious Baroness Foskett...

M.R.C. Kasasian was raised in Lancashire. He has had careers as varied as a factory hand, wine waiter, veterinary assistant, fairground worker and dentist. He is the author of the much loved Gower Street Detective series, five books featuring personal detective Sidney Grice and his ward March Middleton. The first book in his new series, Betty Church and the Suffolk Vampire, is set in a sleepy seaside town during World War II and is out this year. He lives with his wife, in Suffolk in the summer and in Malta in the winter.

1. The Curse of the House of Foskett (The Gower Street Detective Series)

Book Description Paperback. Condition: Fair. A readable copy of the book which may include some defects such as highlighting and notes. Cover and pages may be creased and show discolouration. Seller Inventory # GOR007512889

2. The Curse of the House of Foskett (The Gower Street Detective Series)

Book Description Head of Zeus, 2001. Condition: Good. Ships from the UK. Former Library book. Shows some signs of wear, and may have some markings on the inside. Seller Inventory # GRP87500747

3. The Curse of the House of Foskett (The Gower Street Detective Series)

Book Description Head of Zeus, 2001. Paperback. Condition: Good. Connecting readers with great books since 1972. Used books may not include companion materials, some shelf wear, may contain highlighting/notes, may not include cdrom or access codes. Customer service is our top priority!. Seller Inventory # S_282677168

4. Curse Of The House Of Foskett

5. Curse Of The House Of Foskett

Book Description Head Of Zeus, 2001. Paperback. Condition: GOOD. Has little wear to the cover and pages. Contains some markings such as highlighting and writing. Seller Inventory # 1781853274_abe_gd

6. The Curse of the House of Foskett (The Gower Street Detective Series)