Items related to Never Let a Serious Crisis Go to Waste: How Neoliberalism... 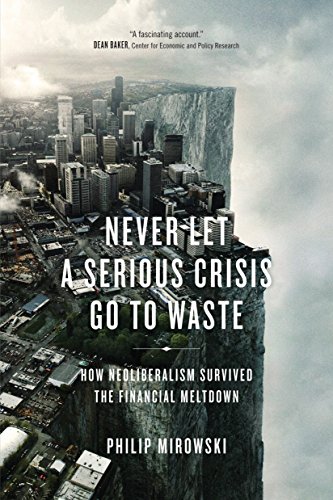 At the onset of the Great Recession, as house prices sank and joblessness soared, many commentators concluded that the economic convictions behind the disaster would now be consigned to history. Yet in the harsh light of a new day, attacks against government intervention and the global drive for austerity are as strong as ever. 'Never Let a Serious Crisis Go to Waste' is the definitive account of the wreckage of what passes for economic thought, and how neoliberal ideas were used to solve the very crisis they had created. Now updated with a new afterword, Philip Mirowski's sharp and witty work provides a roadmap for those looking to escape today's misguided economic dogma.

It is hard to imagine a historian who was not an economist (as Mirowski is) being able to encompass the economics of the second half of the 20th century in its diversity and technicality. --London Review of Books

Philip Mirowksi is the most imaginative and provocative writer at work today on the recent history of economics. --Boston Globe

Philip Mirowski is a historian and philosopher of economic thought at the University of Notre Dame, Indiana. His many previous books include 'Machine Dreams' and 'More Heat than Light,' and he appeared in Adam Curtis's BBC documentary 'The Trap.'