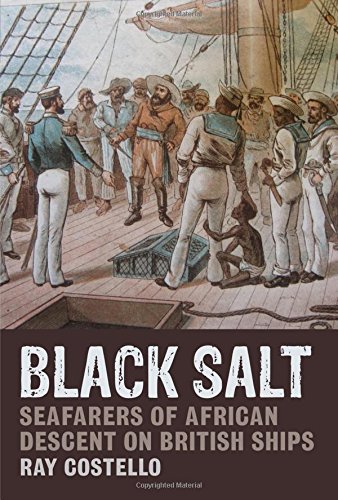 During the Age of Sail, black seamen could be found in many shipboard roles in the Royal Navy, such as gunners, deck-hands and 'top men', working at heights in the rigging. In the later Age of Steam, black seamen were more likely to be found on merchantmen below deck; as cooks, stewards and stokers. Nevertheless, the navy was possibly a unique institution in that black and white could work alongside each other more than in any other occupation. In this fascinating work, Dr. Ray Costello examines the work and experience of seamen of African descent in Britain's navy, from impressed slaves to free Africans, British West Indians, and British-born Black sailors. Seamen from the Caribbean and directly from Africa have contributed to both the British Royal Navy and Merchant Marine from at least the Tudor period and by the end of the period of the British Slave Trade at least three percent of all crewmen were black mariners. Black sailors signed off in British ports helped the steady growth of a black population. In spite of racial prejudice in port, relationships were forged between sailors of different races which frequently ignored expected norms when working and living together in the isolated world of the ship. Black seamen on British ships have served as by no means a peripheral force within the British Royal and Mercantile navies and were not only to be found working in both the foreground and background of naval engagements throughout their long history, but helping to ensure the supply of foodstuffs and the necessities of life to Britain. Their experiences span the gamut of sorrow and tragedy, heroism, victory and triumph.

Written with enthusiasm and a joy to read, Costello enlightens the reader with numerous fascinating stories and anecdotes as well as previously unpublished first-hand testimonies of black seafarers and their adventures at sea and on land, some positive, others tragic. --History Today

Costello certainly accomplishes the goal of opening up the study of Black seamen in British merchant and naval ships. More work is to be done, but the start is here, with this book. --The Northern Mariner/Le marin du nord, Vol. XXIII, No. 2, 04/2013

Ray Costello is an independent historian and writer and an honorary research fellow of the School of Sociology and Social Science, University of Liverpool.