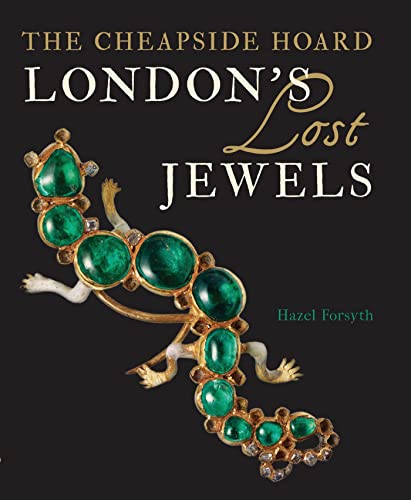 In 1912, labourers on a building site in Cheapside in the City of London unearthed a great trove of gemstones and jewels which had lain undisturbed for some three hundred years. Known and celebrated as the Cheapside Hoard, it is still the largest cache of its kind to have been discovered. These objects, dazzlingly beautiful, intricate and often astonishing, are evocative emissaries from London's past. The Cheapside Hoard remains the single most important source of our knowledge of the Elizabethan and early Stuart jewellers' trade and, by extension, life and fashion in London society of the era.

London's Lost Jewels has been written to accompany a glittering new exhibition at the Museum of London, which marks the hundredth anniversary of the original public display and for the first time reveals the Cheapside Hoard in its entirety. It provides much new information about the city's role in the international gem and jewellery trade during one of the most dynamic periods of English history. A wealth of fascinating stories and lavish illustrations bring these exquisite treasures to life.

'Hazel Forsyth, the curator, spent years studying letters, stock lists and rent books as well as the objects themselves. Her patient scholarship has unearthed plenty of dubious behaviour, much of it chronicled in her excellent book, London's Lost Jewels.' (The Economist)

'Forsyth has revealed the social context of these jewels in a new book, itself a treasure trove of expertise and a rich visual experience in its own right.' --(World of Interiors)

'This is a comprehensive, fascinating insight into the Elizabethan and early Stuart jewellery trade in London.' --(The Jeweller Magazine)

'Indispensable to the enjoyment of the exhibition is a well-researched book that includes, besides much previously unpublished information, a gripping account of the murder of a rich gem trader at sea, describing the dangers confronting the enterprising men who brought these rich and rare gems to London for the beautification of English women.' (Apollo Magazine)

'...a landmark publication that delves into the complex and often murky world of the London goldsmith trade.' --(Jewellery History Today)

'...positively cinematic in its drama and detail.' --(Burlington Magazine)

Hazel Forsyth is the Senior Curator of the Medieval and Post-Medieval Collections at the Museum of London and curator of The Cheapside Hoard: London's Lost Jewels (11 October 2013-27 April 2014). She is a fellow of the Society of Antiquaries, a fellow of the Royal Society of Arts and a freeman of the Worshipful Company of Goldsmiths.