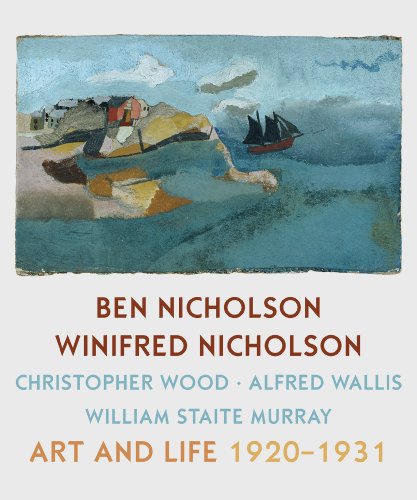 This book examines the artistic partnership of Ben Nicholson and Winifred Nicholson in the 1920s and their friendship and collaboration with Christopher Wood, Alfred Wallis, and the potter William Staite Murray. Inspired by each other, the Nicholsons experimented furiously and often painted the same subject, one as a colorist the other more interested in form. Winifred wrote of her time with Ben, 'All artists are unique and can only unite as complementaries not as similarities'. New research based on previously unpublished letters, photographs and other material draws out their fascinating connections. All the works, many of which are previously unpublished, are illustrated in full color, each with comments relating to the work by the artists and their critics.

a fascinating exploration...The story of Ben and Winifred Nicholson and of their friends who visited them in London, Cumberland or St Ives is one which has been slightly overshadowed by the figure of Ben Nicholson's celebrated second wife Barbara Hepworth. This book allows us to revisit a seminal eleven years of creative discoveries and beneficial partnerships... This beautifully illustrated volume provides a wealth of information and references on the period and takes us on a journey through the day-to-day preoccupations of the artists behind the works. --(Cercles)

Jovan Nicholson is an independent art historian with a particular interest in modern British art and has worked on various projects with the Henry Moore Foundation, the Barbican Art Gallery, the Russian Museum, St Petersburg, the Tretyakov Gallery, Moscow and the British Council, organising exhibitions between Russia and Britain, notably Diaghilev, Creator of the Ballets Russes and New Art for a New Era: Malevich's Vision of the Russian Avant-Garde. He has worked with the British Council touring exhibitions of modern British art throughout Russia, including 40 Years of British Sculpture, and Dimensions Variable, and collaborated with Museums in Russia, Ukraine, Belarus, Estonia, Latvia, Lithuania, Armenia and Georgia. He has been an adviser on a number of exhibitions, books and other publications about Winifred Nicholson and is an acknowledged expert on her work. He is a grandson of Ben and Winifred Nicholson.

Sebastiano Barassi is Curator of Collections and Exhibitions at The Henry Moore Foundation, Perry Green. From 2001-12 he was Curator of Collections at Kettle's Yard, University of Cambridge, and prior to that he worked at the Courtauld Institute Gallery in London. He has written extensively about early-twentieth-century British art. The exhibitions he has curated include The Roundhouse of International Spirits: Arp, Benazzi, Bissier, Nicholson, Richter, Tobey and Valenti in the Ticino (2009), We the Moderns: Gaudier-Brzeska and the Birth of Modern Sculpture (2007) and Immaterial: Brancusi, Gabo, Moholy-Nagy (2004).

Julian Stair is a potter and writer. He has exhibited internationally over the last thirty years and has work in over twenty public collections including the Victoria and Albert Museum, American Museum of Art and Design and the Museum Boijmans van Beuningen, Netherlands. He completed his PhD at the Royal College of Art in 2002 and has published extensively including 'The Employment of Matter: Pottery of the Omega Workshop', for Beyond Bloomsbury: Designs of the Omega Workshop 1913-19, Courtauld Gallery (2009).