Items related to China at War: Triumph and Tragedy in the Emergence...

Ven, Hans Van De China at War: Triumph and Tragedy in the Emergence of the New China 1937-1952

China at War: Triumph and Tragedy in the Emergence of the New China 1937-1952 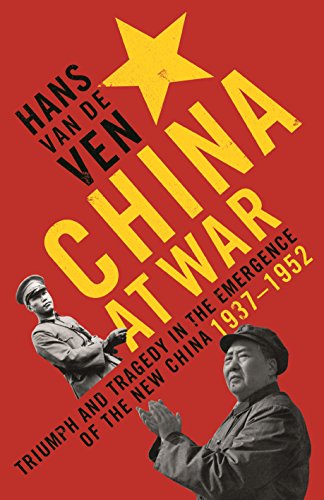 China's War of Resistance against Japan, as WWII is known in China, was never about the defeat of Japan alone. China was also at war with itself. Between 1937 and 1949, a vicious revolutionary war between Nationalists and Communists, divided by radically different views about China's future, ravaged the country, killing millions and laying waste to cities and the countryside. The outcomes of these wars have shaped the country and the world since.

China at War focuses on this period, examining the complex truth behind the propaganda of both East and West. Cambridge professor Hans van de Ven shows how the results of the fighting ended European imperialism in East Asia, restored China to its traditional position of regional centrality, and gave the USA a decisive role in East Asian politics. In the process, he argues, it also triggered profound changes in warfare, as important as the development of atomic weapons, and gave the countryside a new social, political and military significance.

Through fascinating personal accounts and extensive scholarship, China at War casts new light on this crucial period of history, and harnesses contemporary art, culture and ideology to illuminate world-changing events.

China in the twentieth century was as much at war with itself as with Japan and, in Korea, with the United States. In this outstanding account of modern China through the lens of war, van de Ven narrates this history with immense clarity, while also taking care to show how the violence of these decades shaped, and often consumed, the lives of individual Chinese fated to live in difficult times. (Timothy Brook, author of 'Collaboration: Japanese Agents and Local Elites in Wartime China')

A masterful narrative of the fifteen long years of war during which China was destroyed and transformed. For readers interested in military history on a global scale who may or may not have much knowledge of modern Chinese history, this book will become a classic of its kind. (Stephen MacKinnon, Arizona State University)

China at War is far superior to any comparable treatment I have seen. Sober, comprehensive, and well written, it is a book that will last. (Arthur Waldron, University of Pennsylvania)

An authoritative account of the brutal wars that wracked China between 1937 and 1952, including China's war with Japan, the Chinese Civil War, and the Korean War, out of which New China and modern East Asia emerged