Items related to The Art of Rivalry: Four Friendships, Betrayals, and...

The Art of Rivalry: Four Friendships, Betrayals, and Breakthroughs in Modern Art 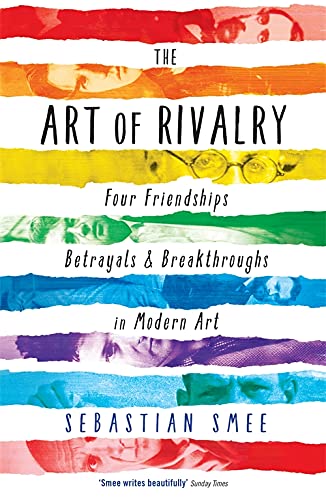 These were some of the most famous and creative relationships in the history of art, driving each individual to heights of creativity and inspiration - and provoking them to despair, jealousy and betrayal. Matisse's success threatened Picasso so much that his friends would throw darts at a portrait of his rival's beloved daughter Marguerite, shouting 'there's one in the eye for Matisse!' And Willem de Kooning's twisted friendship with Jackson Pollock didn't stop him taking up with his friend's lover barely a year after Pollock's fatal car crash.

In The Art of Rivalry, Pulitzer Prize-winning art critic Sebastian Smee explores how, as both artists struggled to come into their own, they each played vital roles in provoking the other's creative breakthroughs - ultimately determining the course of modern art itself.

A fascinating examination ... This is art history as human friction - one in the eye for those who think art is a high-minded enterprise. (Tatler 2016-09-30)

The keynotes of Sebastian Smee's criticism have always included a fine feeling for the what of art - he knows how to evoke the way pictures really strike the eye - and an equal sense of the how of art: how art emerges from the background of social history. To these he now adds a remarkable capacity for getting down the who of art - the enigma of artist's personalities, and the way that, two at a time, they can often intersect to reshape each in the other¹s image. With these gifts all on the page together, The Art of Rivalry gives us a remarkable and engrossing book on pretty much the whole of art. (Adam Gopnik)

A magnificent book on the relationships at the roots of artistic genius. Smee offers a gripping tale of the fine line between friendship and competition, tracing how the ties that torment us most are often the ones that inspire us most. (Adam Grant, Wharton professor and New York Times bestselling author of Originals and Give and Take)

Modern art's major pairs of frenemies are a subject so fascinating, it's strange to have a book on it only now - and a stroke of luck, for us, that the author is Sebastian Smee. He brings the perfect combination of artistic taste and human understanding, and a prose style as clear as spring water, to the drama and occasional comedy of men who inspired and annoyed one another to otherwise inexplicable heights of greatness. (Peter Schjeldahl, art critic of the New Yorker)

One of those rare books that manages to show,convincingly, the exalted stuff of genius emerging from the low chaos of life (Economist)

1. The Art of Rivalry

2. The Art of Rivalry

3. The Art of Rivalry

4. The Art of Rivalry: Four Friendships, Betrayals, and Breakthroughs in Modern Art