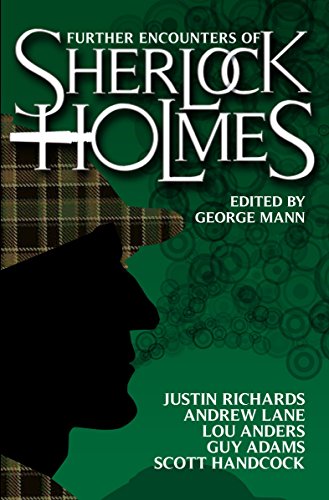 BRAND-NEW TALES OF THE GREAT DETECTIVE.

Once again the spirit of Sherlock Holmes lives on in this collection of twelve brand-new adventures. Wonder at how the world s greatest consulting detective plays a deadly game with the Marvel of Montmartre; investigates a killing on the high seas; discovers Professor Moriarty s secret papers; battles a mysterious entity on a Scottish mountain; travels to the Red Planet to solve an interplanetary murder; and solves one last case with Dr Watson Jr!

"Further Encounters manages the rather remarkable feat of not containing an uninteresting story within its pages...we hope that there will be many more encounters to come." --Starburst Magazine

"Twelve bizarre stories of the futuristic, the supernatural, the paranormal and the surreal by authors experienced in fantasy and science-fiction and all Holmes fans... I fancy that if you enjoyed the The Encounters of Sherlock Holmes you ll enjoy The Further Encounters." --The Sherlock Holmes Journal

"There is a steampunk atmosphere to the stories which veer from the thrilling, to the amusing, to the grotesque... This is a corker of a book and strongly recommended." --The Louth Leader

"It doesn t take a genius to deduce that Further Encounters of Sherlock Holmes is well worth your examination!" -GNN

"Every single input to the collection is incredibly well written and I really enjoyed every one... A gem of a book." ----The Cult Den

George Mann is the author of the Newbury and Hobbes and The Ghost series of novels, as well as numerous short stories, novellas and audiobooks. He has written fiction and audio scripts for the BBCs Doctor Who and Sherlock Holmes. He is also a respected anthologist and has edited The Solaris Book of New Science Fiction and The Solaris Book of New Fantasy. He lives near Grantham, UK.