Items related to The Ballad of Halo Jones (2000 AD) 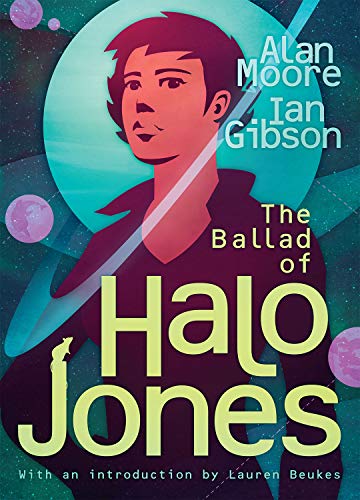 2000 AD proudly presents the classic Alan Moore and Ian Gibson space opera The Ballad of Halo Jones, with a new introduction by Lauren Beukes, the Arthur C. Clarke Award-winning author of Zoo City and The Shining Girls. When Halo Jones grows bored with her life in The Hoop a futuristic world where jobs are scarce and excitement is non-existent she sets out to see the galaxy, any way she can. But can she survive the highs and lows that lie in her path, including an extended period of shipboard servitude and a tour of duty in a terrifying war that defies the physics of space and time?

ALAN MOORE Perhaps the most widely respected comic writer of the modern era, Alan Moore's contribution to the comics' industry is incalculable. Co-creator of some of 2000 AD's most popular series, including The Ballard of Halo Jones and DR & Quinch, he has also numerous Future Shocks and Time Twisters to his name. Outside of 2000 AD, Moore is best known for his work on the epic comic series, V For Vendetta and Watchmen, the latter of which redefined the superhero genre in 1986. Both have been adapted into big-budget Hollywood movies by Warner Brothers, along with two other Moore books, From Hell and League of Extraordinary Gentlemen. IAN GIBSON One of 2000 AD's best-loved and most honoured artists, Ian Gibson is responsible for the co-creation of The Ballad of Halo Jones (with Alan Moore), and created Dredd's love interest: Bella Bagley. Of course, Gibson's involvement with 2000 AD is far more extensive. He has worked on Ace Trucking Co., Judge Anderson, Future Shocks and Robo-Hunter amongst others as well as The Taxidermist in Judge Dredd Megazine. Ian also worked with Jesus Redondo on Mind Wars for Starlord. Pre 2000 AD he worked on House of Hammer and designed Big Ben - A truly British Superhero. Ian has also created album covers and promotional designs for various bands plus a series of covers for Kerrang magazine. His work outside the Galaxy's Greatest Comic also includes Chronicles of Genghis Grimtoad, Foot Soldiers, Green Lantern Corps, Meta-4, Millennium (with Joe Staton), Mr. Miracle, Star Wars: Boba Fett and The Droids, Steed and Mrs. Peel and X-Men Unlimited, plus the original designs for the TV series Reboot. He also created Annie Droid for The Times and worked for some years on the Dredd strip in the Daily Star.

2. The Ballad of Halo Jones

3. The Ballad of Halo Jones

Book Description 2000 AD Graphic Novels 1800-01-01, 1800. Paperback. Condition: Good. Item is in good condition. Some moderate creases and wear. This item may not come with CDs or additional parts including access codes for textbooks. Might be an ex-library copy and contain writing/highlighting. Photos are stock pictures and not of the actual item. Seller Inventory # DS-1781081484-3