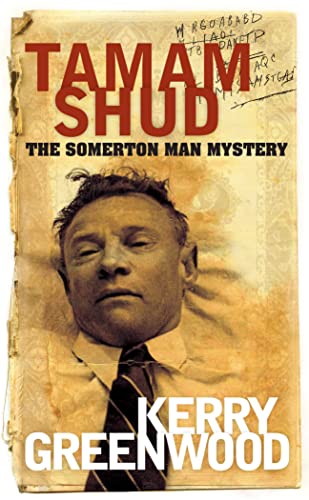 <p>The identity of the Somerton Man, found dead on an Adelaide beach of the same name in 1948, is one of the most mysterious unsolved cases in Australian crime history. Best known as the ‘taman shud case’, after a tiny piece of rolled-up paper with these words printed on it was found sewn into the dead man’s pocket, the case has baffled police for decades. The phrase <em>taman shud</em> means ‘it is finished’ and is from the last page of a collection of poems called <em>The Rubaiyat</em> by Omar Khayyam, which was extremely popular in Australia at that time. The central theme of these poems is that one should live life to the full and have no regrets when it ends. As a result, police initially thought the man had committed suicide. With no hard evidence to back this theory and a raft of mysterious clues that have pointed detectives in other directions that have all led nowhere, the case remains unsolved. </p> <p>This case is as strange as a John Le Carre plot, but as author Kerry Greenwood makes clear, the strangest part is that whoever killed him removed all possible ways of identifying him, but left him in full public view so that he had to be found. Greenwood delves into the police and coroner’s files to find out why. In the process she uncovers new clues and finally cracks the code that was printed inside the famous copy of <em>The Rubaiyat</em>. But has she solved the case? </p>

<p>Kerry Greenwood is one of Australia’s most popular crime fiction writers, best known for her on-going detective series of Phryne Fisher books (pronounced Fry-knee, to rhyme with briny), which was made into an ABC television series in 2012. She has also written several plays, including <em>The Troubadours</em> with Stephen D’Arcy, is an award-winning children’s writer and has edited and contributed to several anthologies. In 1996 she published a book of essays on female murderers called <em>Things She Loves: Why women kill</em>. Kerry has worked as a folk singer, factory hand, director, producer, translator, costume-maker, cook and is currently a solicitor. When she is not writing, she works as a locum solicitor for the Victorian Legal Aid. </p>

Book Description NewSouth Publishing, Australia, 2013. Paperback. Condition: New. Language: English. Brand new Book. In 1948 a man was found dead on an Adelaide beach. Well-dressed and unmarked, he had a half-smoked cigarette by his side, but no identity documents. Six decades on we don't know who he was, how he got there or how he died. Somerton Man remains one of Australia's most mysterious cold cases.Yet it is the bizarre details of this case that make it the stuff of a spy novel. The missing labels from all his clothing. The tiny piece of paper with the words 'Tamam Shud' found sewn into the lining of the dead man's coat. A mysterious code found etched inside the very book of Persian poetry from which this note was torn. Brimming with facts that are stranger than fiction, the case has intrigued novelist Kerry Greenwood for almost her whole life. She goes on a journey into her own past to try to solve this crime, uncovering a new way of writing about true crime - and herself - as she goes. Seller Inventory # AAV9781742233505