Items related to JESUS CHRIST's Invincible Power at Age 12 and Under,...

Jumbo, Alexander JESUS CHRIST's Invincible Power at Age 12 and Under, REVEALED!: Great Healing, Great Exorcising; Destroying Every power of Satan, when Requested! (A Translation from Old English to Modern English)

JESUS CHRIST's Invincible Power at Age 12 and Under, REVEALED!: Great Healing, Great Exorcising; Destroying Every power of Satan, when Requested! (A Translation from Old English to Modern English) 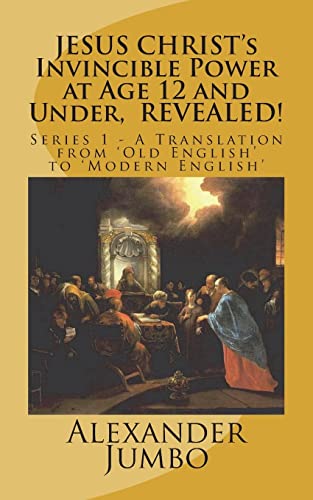 Book Description Paperback. Condition: New. Language: English. Brand new Book. JESUS CHRIST's Invincible Power at Age 12 and Under, REVEALED! Discover in this book the greatest collection of miracles ever known on Earth! The Lord Jesus Christ started performing miracles [with the assistance of His mother: Saint Mary], from the first hour of His birth. The first person He healed, as downloaded next, in 'old English language' was the old lady Saint Joseph fetched to assist with the delivery of Baby Jesus [though she did not assist for she arrived with Saint Joseph to find Baby JESUS already in Saint Mary's arms]. '4 In the three hundred and ninth year of the ćra of Alexander, Augustus published a decree that all persons should go to be taxed in their own country. 5 Joseph therefore arose, and with Mary his spouse he went to Jerusalem, and then came to Bethlehem, that he and his family might be taxed in the city of his fathers. 6 And when they came by the cave, Mary confessed to Joseph that her time of bringing forth was come, and she could not go on to the city, and said, Let us go into this cave. 7 At that time the sun was very near going down. 8 But Joseph hastened away, that he might fetch her a midwife; and when he saw an old Hebrew woman who was of Jerusalem, he said to her, Pray come hither, good woman, and go into that cave, and you will there see a woman just ready to bring forth. 9 It was after sunset, when the old woman and Joseph with her reached the cave, and they both went into it. 10 And behold, it was all filled with lights, greater than the light of lamps and candles, and greater than the light of the sun itself. 11 The infant was then wrapped up in swaddling clothes, and sucking the breasts of his mother St. Mary. 12 When they both saw this light, they were surprised; the old woman asked St. Mary, Art thou the mother of this child? 13 St. Mary replied, She was. 14 On which the old woman said, Thou art very different from all other women. 15 St. Mary answered, As there is not any child like to my son, so neither is there any woman like to his mother. 16 The old woman answered, and said, O my Lady, I am come hither that I may obtain an everlasting reward. 17 Then our Lady, St. Mary, said to her, Lay thine hands upon the infant; which, when she had done, she became whole.' IN LIKE MANNER, MAY YOU BE HEALED FOR READING ABOVE QUOTATION! Consider another miracle: Mary looks on a woman in whom Satan had taken up his abode, and she becomes dispossessed. 'THEN they went into another town where there was a woman possessed with a devil, and in whom Satan, that cursed rebel, had taken up his abode. 2 One night, when she went to fetch water, she could neither endure her clothes on, nor to be in any house; but as often as they tied her with chains or cords, she brake them, and went out into desert places, and sometimes standing where roads crossed, and in churchyards, would throw stones at men. 3 When St. Mary saw this woman, she pitied her; whereupon Satan presently left her, and fled away in the form of a young man, saying, Wo to me, because of thee, Mary, and thy son. 4 So the woman was delivered from her torment; but considering herself naked, she blushed, and avoided seeing any man, and having put on her clothes, went home, and gave an account of her case to her father and relations, who, as they were the best of the city, entertained St. Mary and Joseph with the greatest respect.' This little book of 63 pages is full of powerful and positive results that can become a part of you when you read it and keep it by you. A few days ago, I wanted to have 30 minutes walk. It was a stormy day. As I stepped out of my front door, I was surprisingly welcome by a splendid sunshine with no wind. Immediately I got back home the storm returned. This really surprised my wife and me. You could buy a handful of them to place one, say in your lounge, another in your place of work, and so on, to make you conscious of great miracles until they start and continue happening in your life. Enjoy r. Seller Inventory # APC9781721188529

Jesus Christ's Invincible Power at Age 12 and Under, Revealed!: Great Healing, Great Exorcising; Destroying Every Power of Satan, When Requested!

JESUS CHRIST's Invincible Power at Age 12 and Under, REVEALED!: Great Healing, Great Exorcising; Destroying Every power of Satan, when Requested! (A Translation from Old English to Modern English)

JESUS CHRIST's Invincible Power At Age 12 and Under Revealed!: Great Healing, Great Exorcising; Destroying Every power of Satan, when Requested!

Jesus Christ's Invincible Power at Age 12 and Under, Revealed!: Great Healing, Great Exorcising; Destroying Every Power of Satan, When Requested!