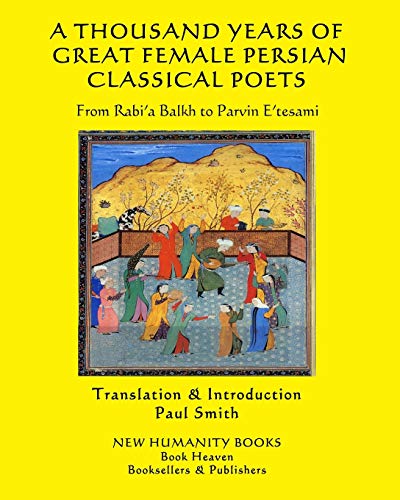 Book Description Paperback. Condition: New. Large type / large print edition. Language: English. Brand new Book. A THOUSAND YEARS OF GREAT FEMALE PERSIAN CLASSICAL POETS From Rabi'a Balkh to Parvin E'tesami Translation & Introduction Paul Smith Rabi'a of Balkh (10th c.) the first known female poet who wrote in Persian was the princess of Afghanistan whose love for a slave of her father the king caused her downfall. she wrote many of her poems in her own blood on the walls of the prison. Mahsati (12th century) was the liberated court poet of Sultan Sanjar who knew Nizami, Omar Khayyam. She composed in the ruba'i form and revolutionized it with her often scandalous verse. Jahan Khatun (1326-1416) was a beautiful, liberated princess in Shiraz and a friend and pupil of the great Hafiz. her Divan is four times the size of his. Makhfi or Zebunissa (1638-1702) was the daughter of the Emperor of India Aurangzeb and was eventually imprisoned and tortured to death for her Sufi views. Her over poems are deep, powerful, spiritual and at times heartbreaking. Tahirah (1817-1853). was a beautiful and intelligent woman who led a short and stormy life. She was a devotee of the Bab, who from Shiraz had given his prophetic message that would later appear in the form of Baha-ul-lah, the founder of the Baha'is. She was not only a poet but also wrote prose. Hayati (18th - 19th C.) was born into a Sufi family in the Kerman province of Persia. She was initiated into the Ni'matullahi Sufi order by Nur 'Ali Shah and was well-known for her passionate, mystical poems. Parvin (1907-1941) was one of Iran's greatest female poets. Her poems had mainly social or mystical subjects, often about the tyranny of the rich, rights of the poor and downtrodden, the role of women, meaningful fabulous fables. The correct rhyme-structure has been kept and the meaning of all these poems. Large Format (8"x10") Large Print (16pt) Pages 400. Paul Smith (b. 1945) is a poet, author and translator of many books of poets including Hafiz, Sadi, Nizami, Rumi, 'Attar, Sana'i, Jahan Khatun, Obeyd Zakani, Mu'in, Khusrau, Nesimi, Kabir, Anvari, Ansari, Jami, Omar Khayyam, Iqbal, and many others, as well as his poetry, fiction, plays, biographies, children's books, and 12 screenplays. /author/smithpa. Seller Inventory # APC9781705370230