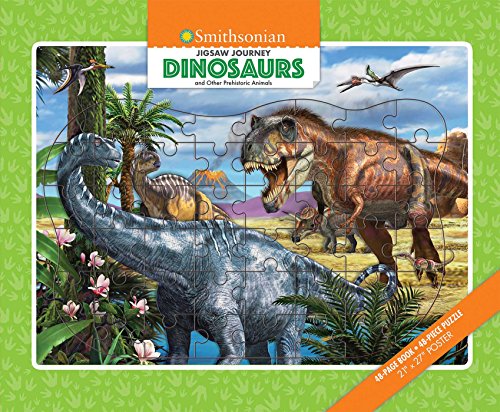 Explore the world of dinosaurs with the Smithsonian!

From the mighty T.rex to the plant-grazing Triceratops, Smithsonian Jigsaw Journeys: Dinosaurs & Other Prehistoric Animals includes fascinating information about the creatures that roamed the earth during the Mesozoic Era. After reading about the discovery of Sue the T.rex, why Ankylosaurus was covered in spiky plates, and what caused the extinction of dinosaurs and other prehistoric animals, kids can complete the included puzzle to bring the dinosaurs to life.

Franco Tempesta was born in Milan, Italy. Since he was a child, he loved drawing animals, dinosaurs, and dragons. Specializing in naturalistic illustration, in the last ten years he has focused his attention on the realization of realistic images of dinosaurs and primitive mammals. He has collaborated with national and foreign publishers, such as National Geographic, Random House, Firecrest Publishing, Geoworld, and important advertising agencies of Italy. Since 1990, he has been a member of the Italian Illustrators Association. In April 2014, the Museum of Paleontology of Naples hosted a permanent exhibition dedicated to his illustrations of dinosaurs. Franco Tempesta loves nature, the sea, diving, and traveling.