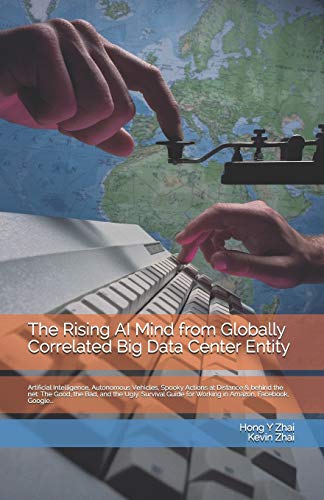 Book Description Independently Published, United States, 2020. Paperback. Condition: New. Language: English. Brand new Book. The global scale artificial intelligent entity collectively forms what we called rudiment mind of the earth brain (MOTEB) and takes into form in the heat of big data, artificial intelligence, and global networks. The flow of information creates communications; the competing and gating of these streams are representations of the natural selections of survival of the fittest; finally, global consciousness comes into existence in the form of the integrity of the distributed entire assembly (IDEA) - Patient HM was the most famous case; Clive Wearing is a stupefying case alive: Hellen Keller was not able to form thoughts simply because of lacking of language. Clive, ample of resources, no thought forming from his 7-second memory spans - It is not hard to say that the language elements and their associated connectivity are of paramount importance for intelligence - Quantum computing aside, the huge leap of world wide web during the past quarter of century orchestrated the master stroke of the IAAD epoch, which spans from the beginning of homo sapiens all the way to current generation civilization - After switching adviser, Einstein's mind was an indecision. One year later, Einstein was conceiving . to withdraw the damn PhD study, "the whole comedy has become tiresome for me." . and Einstein could not stop doing "That Thing You Do" until he was finally stuck on a so-called unified theory and had successfully driven himself into (so far) "a dead corner." - There the inauguration of autonomous high-speed train in Asia: the fast, dizzy, glamorous, and comfortable autonomous train has become a new breed of high-tech luxury - Here the S*** hits the fan: more deadly self-driving car accidents. The black Tesla Model S had run a red light before killing 2; Tesla has crashed into everything: fire trucks, police cruising vehicles: "automation complacency." Plus rejecting high-speed rail while left Keystone Pipeline and Deepwater Horizon spilling, are all to ensure ample endorphin in the nucleus accumbens of top 1% population - With all the issues from intrinsic flaws and limitations, what are the outlook on this self-driving car thing anyway? Although there are not as good as one may expected, they are still silver lines out there - (F-35 jet) sensor fusion software was the most difficult program: Block 3 software had 8.6 million lines of code. US congress described this software suite "as complicated as anything on the earth" at the wake of a serial of software bug related issues - Amazon's free banana and robotics as co-workers; Apple, Facebook, Google, LinkedIn (Microsoft) and their Astromega luxury touring coaches: stainless steel body frame, dramatic sky rooftop, dual-deck entertainment, Wi-Fi on board and VPN - On-site ginormous snacks, beverages, liquors, food, over $10K high-end espresso makers (self-served) & staffed coffee houses, manor grade furniture . Massage chairs, sleeping pods, meditation rooms with full massage service. GYMs, pools, bowling alleys and the dance floors - Amazon is good, if you can work in Amazon, you'll find easy to work anywhere! Damn stressful. Apple: To bus drivers, 200MB RAM, >700MB (SSD storage), >5 GB (Hard Disk), with a "Clay-2 supercomputer" computing power, for each soul of the 7,000,000,000 on the planet. Aggregating with Microsoft, IBM, Facebook, Twitter, Instagram, Amazon, . and many more, the number will be astonishingly huge. Seller Inventory # APC9781654255275